You are here: Home>Topics>Maritime>Upstream Shipyards>A ship launch at Wivenhoe Shipyard in 1943

A ship launch at Wivenhoe Shipyard in 1943

Ship launches at that time were big social occasions 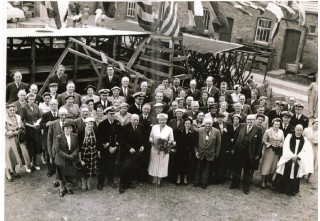 A party of people at the Wivenhoe Shipyard gathered for launch of a ship in about 1943. Ship launches were social occasions even then. Hylda Oxton, wife of the MD of the yard, is the lady in white holding a bouquet.
Photo loaned by Barbara Husk 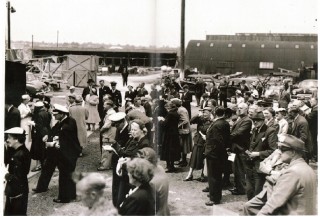 A gathering of people in Wivenhoe Shipyard for the launch of a ship in about 1943. Launches were social affairs, even in wartime. Marion Husk is in this picture, centre right standing with one leg forward and hand to her face.
Picture loaned by Barbara Husk 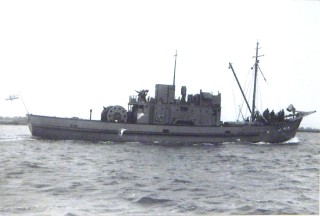 MMS15, Wivenhoe's first, and one of the Royal Navy's first motor minesweepers leaves the Colne to begin her great adventure.
Nottage Maritime Institute 00619

These two photographs show what a special occasion a launch was at this shipyard which was re-opened at the outbreak of War to build small vessels for the Royal Navy.

To help the Navy, Donald Oxton who ran the shipyard at Rowhedge in the 1930s, re-established the old yard at Wivenhoe, left derelict since 1936 when the yard was taken over from Otto Andersen by the National Shipbuilders Securities Ltd to take capacity out of the shipbuilding industry.   Mr Oxton is seen here on the left of the lady dressed in white who is his wife, Hylda Oxton.

We don’t know any details of the ship being launched. It was obviously significant given that there are so many naval officers in the picture and the Mayor of Colchester is also present. It is quite possible it was one of 16 motor minesweepers built at the yard.

Wivenhoe Shipyard Ltd, built sixteen ‘short’ 105 foot, and eight ‘long’ 126 foot, motor minesweepers for the Royal Navy and Royal Netherlands Navy during World War 2.  Because of the small size and their initials (they only had numbers)  they were nicknamed “Micky Mouse boats”.

The design of the short MMS was based on the larger sort of motor fishing vessels which were being used around the coasts of Britain.

For more information about the MMS which were built at the Wivenhoe Shipyard, click here

Thanks to John Collins and the Nottage Maritime Institute for some of this information and to Barbara Husk for the loan of the photographs.