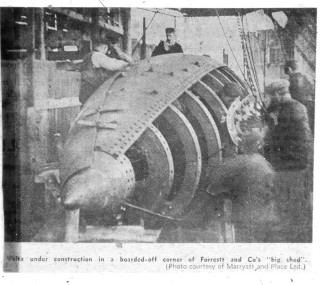 The Volta under construction in the building shed. Her cramped interior, thick frames and plating, and the size of her rivets are very obvious.
Nottage Maritime Institute 04332.4.053 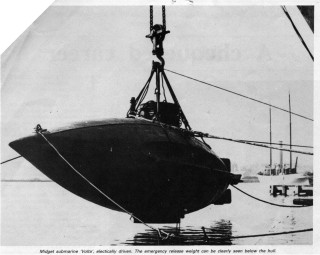 The Volta, here suspended from a crane, about to be lowered into the river. In this picture her streamlined underwater shape can clearly be seen.
Nottage Maritime Institute 02086.17.4 Cropped 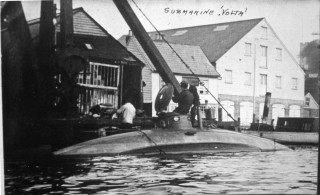 The Volta afloat in the river alongside the shipyard. In the middle of the picture is the 'Ship at Launch' pub and next to that the mold loft and some workshops of the shipyard.
Nottage Maritime Institute 01195.1

The Volta  was a 19tons displacement submarine. 34′ long and 6’9″ diameter.  Power was provided by two electric motors from batteries geared to single screw.  She was launched on 5/6/1905, and completed in 1905 for the British Submarine Co.  The only real submarine ever built on the river and a true mystery, the Volta seems to have eluded a mention in nearly all reference books.

Dubbed a ‘pocket submarine’ by the Daily Mail, the Volta was ordered at the time of the Russian-Japanese War.  The main contractors were the makers of the propulsion machinery, Maryat & Place, Hatton Garden, London, who also built all the auxiliary motors and electrical gear with which the vessel was equipped.  The 80 volt battery was made suitably shaped to fit into the tapered cylinder of the hull.  Just above the keel inside the hull was a balance weight which traveled on a tramway the length of  the hull in a tunnel through all the other equipment.  This, actuated by an electric motor, was controlled by a pendulum to keep the vessel horizontal.  Depth was controlled by an electric pump which filled or emptied the ballast tank, and was expected to be accurate to six inches!  In addition, solid ballast was carried in such a way that it could be released in an emergency to enable the craft to surface rapidly even if partly flooded.  All the electrical equipment was especially sea water resistant and intended to work even when saturated.

The crew consisted of the commander who was stationed in a small conning tower amidships, the ‘driver’ forward who controlled the craft, and a ‘torpedoman’.  Because of the machinery noise, internal communication was by voice pipe despite the close proximity of the three men in such a cramped vessel.  Range was limited by battery power to 40 miles,  but the duration of a mission was extended by fitting an air purifying device to remove carbon dioxide from the atmosphere.

One of the many unusual innovations was a telephone line which could be released from within to float to the surface in order to communicate with the mother ship.

Although it was stated that it could be used as a coast defence weapon, it was primarily intended for attacking enemy ships in harbour for which purpose it could be carried in a battleship’s davits.  The armament consisted of two 12 inch torpedoes.

Trials were successfully completed although disaster nearly struck during the surface speed trial, when the balancing weight was unable to prevent the bows from plunging under.  The problem was easily corrected by modifying the bilge keels.   With a total of nine electric motors in a confined space a magnetic compass was found to be useless, so an early form of gyro-compass was specially designed by for the vessel and made by C. F. Cassella & Co.

The British government of the time took a close interest in the Volta‘s progress and tried to block its export.  The Colne River Police were alerted to keep an eye on her movements.  However, the vessel seems to have ‘disappeared’ and was possibly clandestinely exported to a secret destination.  Japan has been suggested as a possibility as it is likely that that country was the original end customer for the craft; furthermore, the midget submarines used by the Imperial Japanese Navy in the early stages of World War II in the Pacific bore a superficial resemblance to the Volta.  It must be pointed out though, that midget submarines built elsewhere including Britain and Germany were also similar so the idea may well have been copied or re-invented several times.