Wivenhoe Shipyard Ltd was formed to take over the old Forrestt shipyard which had lain unused since 1936. 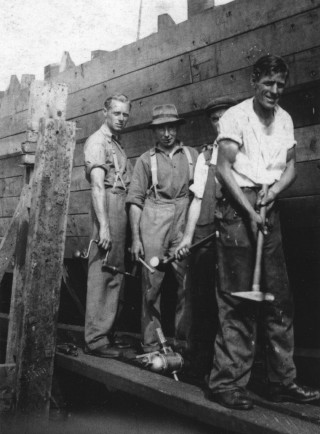 This photo shows my brother-in-law, George Larter, in front of a Rowhedge man.  I also worked at this yard after leaving school at 14 in 1943.

I worked a 52 hour week for the sum of 75p in new money out of which I was stopped 25p for tools. At first I worked with an elderly man, a Mr Harris, who also had two sons working there.  Ted and Jack were their names and they all lived in Wivenhoe.

In winter the yard was very cold. The only man who was warm was the man who boiled the pitch!