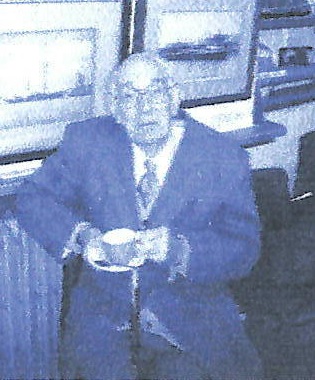 Peter Simons who became a Ship's Draughtsman at Wivenhoe Shipyard

This article was copied from the Wivenhoe Encyclopedia where it was reproduced by kind permission of Wivenhoe News (December 2002 edition).

At the ceremony to mark the site of the old Wivenhoe shipyard, I sat at the head of the dry dock, now retained as a feature at the centre of the little hamlet constructed by Persimmon Homes, and my mind went back to the spectacularly beautiful weather of 1940.

I began work awaiting call-up, in those desperate days, as a 26/- a week shipbuilding apprentice, presenting myself in a stiff new blue boiler suit at the Wivenhoe time office one Monday morning in June with a 3 foot folding boxwood rule in my hand and a packet of sandwiches.

George Cook, the kindly shipwright charge-hand took me to Peter Harris, the ancient shipwright who was sizing up a piece of oak “This young man has come to work with you and Dick. He’s Arthur Simon’s boy. There, I’ll leave you to sort yourselves out” said with his typical nervous grunt.

The dummy submarines were already being stationed at Harwich to confuse the enemy. Two more pontoon skids carrying a very large magnetic coil for detonating magnetic mines were under construction and a succession of ancient trawlers were being fitted with degaussing gear in the dry dock.

A new class of wooden ships of heavy construction was designed – the motor mine sweepers. We had no cranes or heavy lifting gear for these massive oak timbers, and we raised the five tons or more of green English oak by rollers, cant hooks, parbuckles, wedges, wooden blocks and pinch bar levers, positioning them for the fulcrum for maximum advantage, raising the awkwardly shaped pieces inch by inch so that we could mark them and saw them to shape with a pit saw.

This was the time that we took the part of the medieval craftsman, one of us on top lifting the saw at the end of the cutting stroke, guiding it carefully up to the waste wood side of the line. We took in turns to be underdog to do all the cutting on the down-stroke in the snowstorm of the bitter-sweet sawdust.

All the while, overhead, was the noise of the famous battle, most of it taking place in our hearing but not entirely in our sight, as it was to the south high up in the dazzling sunshine.

We witnessed many struggling Dorniers plunging to earth or trying to sneak away close to the ground while we stood pointing, trying to direct the occasional Hurricane or Spitfire to its quarry, and cheering if one came sweeping over, waggling its wings, and hoping he would see our caps raised in salute. Sadly we saw the defeats too, which, reluctantly, we had to admit were ours.

In the twilight and throughout the night, we could feel the air trembling and see the huge glow rising and falling in the south-western sky, behind the silhouette of the trees of Donyland Wood, while the people of London suffered its torment.

We worked the harder for it in the daylight hours, enjoying the exertion of our young bodies in a sort of grim retaliation.