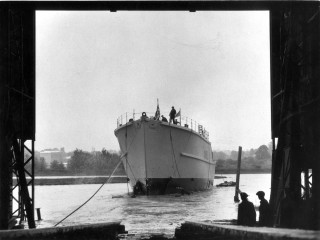 The launch of H.M.S. Calton, the first of the three Coastal minesweepers built by Wivenhoe Shipyard Ltd, was launched on 2nd June 1953.
Nottage Maritime Institute 02842x 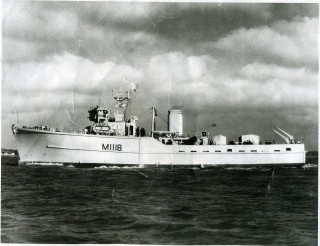 The Calton M1118 on trials, note that she is flying the red ensign denoting that she has not yet been handed over to the Royal Navy, and is still the property of Wivenhoe Shipyard Ltd.
Nottage Maritime Institute 00379 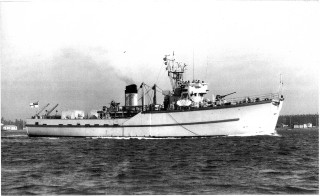 A picture of H.M.S. Calton, now one of Her Majesty's ships, and flying the White ensign. Her pennant number has been painted out because she is a flotilla leader as is shown by the broad black funnel top.
Nottage Maritime Institute 00379f 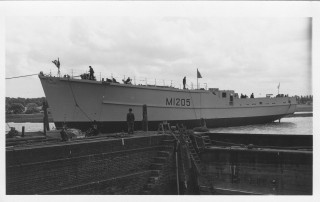 The newly launched H.M.S. Wiston is eased into the dry dock for fitting out. She was the last of the three coastal minsweepers.
Nottage Maritime Institute 04501

The shipbuilders of Wivenhoe have tended not to build warships in times of peace, being generally too preoccupied with the needs of yachtsmen, fishermen and commerce.  However, during the Cold War Wivenhoe Shipyards Ltd built three Coastal Minesweepers for the Royal Navy.  These were ordered at a time when East-West tension was at a height, the Korean War had just broken out and the Soviet threat seemed to loom very large.

The coastal minesweepers were an Admiralty design based on all the experience of wartime and post-war mine clearance operations, with the best features of the long and short MMSs, and the American built Lend-Lease BYMS vessels.  Like the earlier vessels they were built of non-magnetic wood.  They were bigger, 360 tons displacement and 153 feet long, and they had two powerful diesel engines with more than four times the total power of the MMSs.  More than a hundred were ordered from small shipyards all round Britain, but only the first was completed, just, before the end of the Korean War.

These ships performed many useful roles in the Navy, and also served as Royal Naval Volunteer Reserve training ships.  They were very useful for giving young officers an early experience of command, Prince Charles had one, but not a Wivenhoe one.

Unlike their wartime predecessors, they had proper names, they were called after English villages ending in “ton”.

There was little other call for wooden ships, and the ban on steel vessels was still in force, so with the minesweeper building program complete, no further Admiralty orders likely to be forthcoming, the Company went into liquidation, and the shipyard closed for good.

Note: See also this page which shows a ship being launched for the Royal Navy at Wivenhoe Shipyard Ltd by Mrs Hylda Oxton. Click here