The History of Wivenhoe News 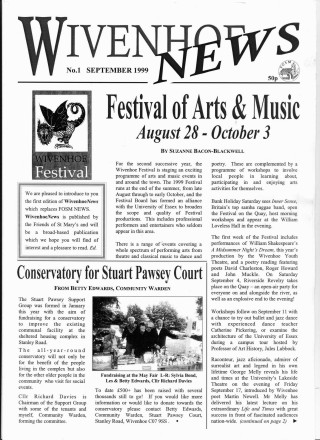 The front cover of the first edition of Wivenhoe News which took over from the very successful FOSM News.

The first edition of Wivenhoe News was published by the Friends of St Mary’s in September 1999 and cost 50p.  It was 12 pages long.   There had been a lot of discussion on what to call the publication as being quarterly it could hardly be described as news. But names such as “Wyvern”  were in use up at the University so for want of a better name we stuck with the straightforward Wivenhoe News.

The Friends of St Mary’s had been formed in 1993 by Jane Cole and her committee.  Their first printed material was the FOSM newsletter in July 1994, this graduated into FOSM NEWS in December 1996, coinciding with Adrienne Wood’s appeal for the restoration of the church bells.

On to September 1999 when FOSM NEWS  became Wivenhoe News.   We did a 700 print run and distributed to 5 outlets.  The University of Essex were our printers. FOSM members got a free copy delivered to them. Harvey Lyon helped with the design. The News grew to 40 pages.  Jane Cole remained editor until 2009 when Peter Kennedy took over. The editorial team included Tom Roberts, and Adele Paterson who dealt with the advertising. Previously Sue Thomas had been on the editorial team and dealt with the advertisers.  The distribution and collection from outlets involved Phyllida Joel, John and Anne Williams, Carol Mitchell, Gill Sleightholm, Deirdre Gill, Jane Stanway and Sue Thomas.   Wivenhoe News won a merit award at the Essex Life community magazine 2007 awards, there were 90 entries.   A copy of each issue went to the British Library.

Over the next few years, the original connection of Wivenhoe News with FOSM declined.  Pip Scott took on the design and layout of what continued to be a forty-page magazine, and Jax Thomas, Jane Valentine and Jane Hughes joined the editorial team.  Having decided to step back from the role of Editor-in-chief, Peter Kennedy handed on that particular baton to Jane Hughes, and in February 2012 Wivenhoe News published its first edition as an independent magazine, severing its links with FOSM.  The editorial team now (in 2016) consists of Sydney Bayley, Jane Hughes, Robert Hughes, Peter Kennedy, Tom Roberts, Pip Scott and Dave Winfield.  It remains Wivenhoe News, valuing the familiarity and strength of a good brand name, and now publishes, four times a year, forty-eight pages of reading about the town and its people, sold – at the very reasonable price of £1 – at various outlets in the town.

To learn more about Friends of St Mary’s and its early history, click here