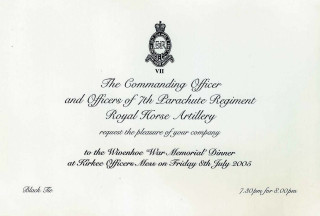 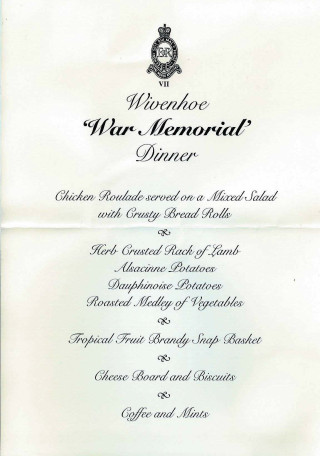 70 guests paid £50 each to join Lt Colonel Richard Hewitt and his officers for a formal dinner at Kirkee Barracks, Colchester. The Regiment provided a splendid occasion; guard of honour at the doors, champagne reception, superb menu, a band during the meal and short speeches!

A raffle held during the evening made £400, supplemented with a fantastic £1,000 from the auction after the meal.  Overall, the event made £2,750.  Cllr Peter Hill, joint Chairman of the Appeal and former Town Mayor, thanked Lt Colonel Richard Hewitt and other officers of 7th Para for a memorable evening; to Brian, Dave and Nick for organising it, and to all those who made it such a financial success, you were all very generous.

He went on to say: “I hope this occasion can increasingly become an opportunity to pray that senseless acts of terrorism and loss of life through conflict will, one day, cease and that Remembrance Day will become a day to celebrate peace throughout the world as well as a time to acknowledge the sacrifice people have made in the past for our future. Wivenhoe’s War Memorial is a reminder of the past and a hope for the future.”

The Appeal was launched in May to raise £3,250 to pay for the refurbishment of the War Memorial in St Mary’s Churchyard, and was kicked-stated with £500 from the Mayor’s Charity Fund.

With donations and the collection at the VE Service held in the Congregational Church in May, the £3,250 needed to pay for the refurbishment proposals had now been raised. Indeed more than the required amount has been raised, which means money will also go to the British Legion care home Halsey House, at Cromer, so the living will also benefit from the Appeal.

New stone to replace the deteriorating render at the base of the memorial was ordered by Wivenhoe Town Council working in partnership with Maurice Clary and Richard Gladwin from the Wivenhoe Branch of the Royal British Legion who have designed and researched the refurbishment proposals.

For more information about the Appeal and Refurbishment project, click here