A true Scout - helpful to everybody 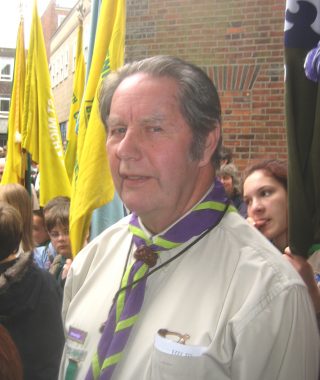 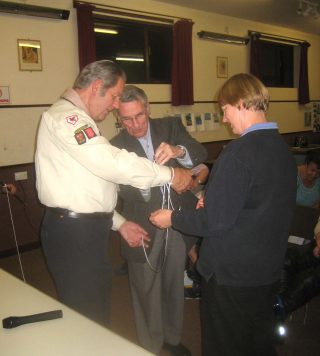 About Doug Meyers who became a stalwart in the community of Wivenhoe, and who sadly died in October 2011 aged just 76.


Doug lived his early years in Greenford, Middlesex where he became a cub scout, then a scout and finally a rover scout. This love of scouting led him to a job working on the RRS Discovery for two years. At that time it was owned by the Scout Association before being later sold to the RNVR.

This dream job was brought to an end by call up for National Service. He met Daphne in 1960, married her in 1962 and they eventually found their way to Wivenhoe, via Harrow and Halstead.   “It seemed to enfold us in its atmosphere” was how Daphne described the move here.

And so Doug became a part of Wivenhoe, where he and Daphne brought up four children:  Duncan, Stuart, Debbie and Steven.

A love of Scouting

Given his love of scouting, it was little surprising that in 1973 he responded to the plea for help by the then Scout Leader which led him to be appointed an Assistant Cub Scout Leader.  Two years later, he became Assistant Scout Leader and a bit later Scout Leader of 1st Colchester Sea Scouts, which met in those days in a concrete barge down on the river, a little downstream of where the Sailing Club is today.  The troop later amalgamated with 3rd Wivenhoe Cubs which met at the Congregational Church and in 1993 he became Group Scout Leader.

Doug was a stalwart of Scouting in Wivenhoe for over 30 years, being awarded the Medal of Merit in 1986 and he received the Chief Scouts Award for 30 years Service in 2008.

Doug was one of the people who was always there.  Like always at Thorrington Scout Ground on a Monday morning and all day Wednesday as an active member of the Working Party team.

One of the Founders of the Ferry

On 23rd October 1991, Doug with Rod Smart, Brian Sinclair and myself we founded the Wivenhoe Ferry Trust. Rod Smart’s enthusiasm for the idea had started when Doug lent him a dinghy at the Regatta that year with which to row people backwards and forwards across the river to Fingringhoe. In subsequent monthly meetings, Doug never said as much as any of the rest of us, but when he did say something, it was always short and to the point. He was never a person for long speeches.

Over the following years, he was Bosun and an invaluable member of the Ferry team. Nothing ever seemed too much trouble.  He was always willing to skipper the boat, check she was sea-worthy each year and get her through her annual inspection, and keep her in working order throughout the season. Even up to the weekend before he went into hospital, he made sure the petrol was topped up.

As a member of the Sailing Club, he was part of the team which lifted the boats in and out of the water each year, with the tractor and lifting gear.  He greatly enjoyed things to do with the river and this appealed to his practical side.

Active in the British Legion

Through being a Scout Leader, he became involved with the Royal British Legion, later becoming an active member and a standard bearer.  For many years Doug would lead the parade down from the Congregational Church to stand smartly to attention at the War Memorial in St Mary’s Churchyard with the Legion colours. He would attend parades and services all over the place, including one year at Wootton Bassett.

Doug was a stand-in gardener at the Wivenhoe Almshouses, when Doug would some times get roped in to mow the grass when the main gardener was away. He was like that. A man you could ask to do things, and know that he was always wiling to help out.

Doug was a true scout all of his life. He lived up to the high expectations of the Scout Law in full measure. A scout is to be trusted, to be kind and considerate to others, to make good use of his time, and is careful of possessions and property.

Doug died in the Royal London Hospital, Whitechapel in October, 2011.  He was a good friend to all the many people who knew him, and will be much missed.

(This article about Doug is based on the Eulogy I gave at his funeral service at St Mary’s Church, Wivenhoe)