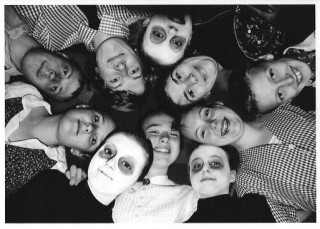 Wivenhoe Youth Theatre ran each summer from 1994 to 2009.  The members were aged between 11 and 22 years old. They worked together for two weeks at the end of each school summer holiday to produce a play. Bar one or two exceptions, the members directed the plays, and crewed them. Each person took a production role as well as acting.

In the early years we also met on Sunday afternoons during term time for workshops, readings and to rehearse one-act plays for local festivals.

Essec County Council Youth Services kindly supported this organisation by allowing us use of the Wivenhoe Centre in Philip Road where we had dressing rooms, rehearsal rooms, the hall for performances, and the coffee bar for a green room.

The organisation was run by volunteers, who were delighted to watch several generations grow in self-confidence and creativity.

2006 – Alice in Wonderland and through the Looking Glass