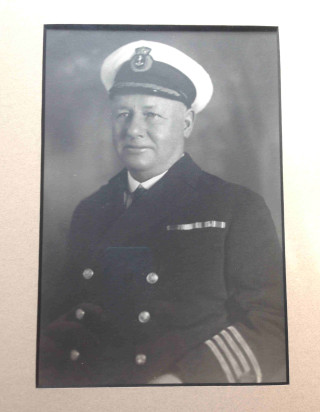 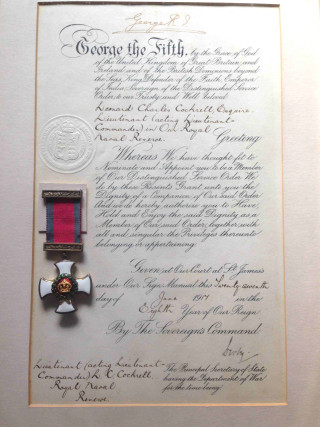 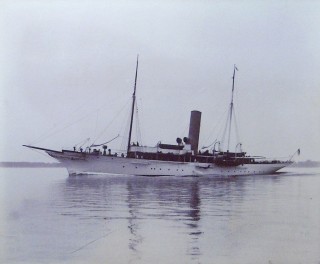 The steam yacht Vanessa in the Colne before WW1.
Nottage Maritime Institute 00473 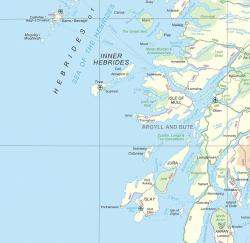 Map of West Coast of Scotland 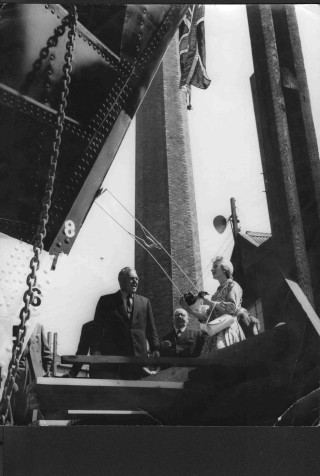 Sheilah Robarts, Leonard Cockrell's grandaughter, receiving a canteen of cutlery after naming and launching the trawler 'Leonard Cockrell' at the yard of Richards Ironworks in Lowestoft on 19th July 1958.
Picture loaned by Colin Fincham 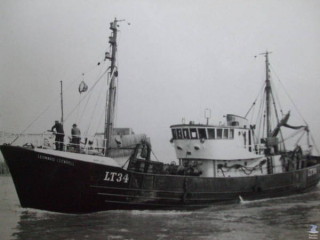 This account of Leonard Cockrell’s life has been researched by his great-grandson Colin Fincham.

Leonard was born in 1874 at East Mersea Hall

Leonard Charles Cockrell was born on 9th September 1874 at East Mersea Hall. He was the 6th child of William Worledge Cockrell (farmer) & his wife Emma Rosa (nee Browne).  They had 13 children. The Rev, Sabine Baring-Gould was Rector at the time and was also one of his godfathers. Both families shared a governess. The name “Cockrell” is a Huguenot name corrupted from “Coquerelle”.

One morning in 1884 there was an earthquake and his father quickly pulled him to a bam wall as the tiles slid off the roof into the yard. Considerable damage was caused to buildings, particularly churches, Langenhoe Church was destroyed and Wivenhoe Church tower cracked. The ‘quake was felt in Chelmsford, and beyond.

He married and came to Wivenhoe

Went to sea at an early age

He went to sea at an early age, and sailed first in sailing ships. He served:

–  2nd mate on the “Turakima“, belonging to the New Zealand Shipping Co., one voyage to New Zealand and back August 20th 1895 – June 7th 1896. He obtained a Certificate of Competence as Master of a foreign-going ship in London 19th November 1896.

– in 1914 was recommended by a Director of the New Zealand Shipping Co, to be employed by Mr. Bolby (senior & junior) on their yacht the  “Vanessa“

Following the start of the Great War in 1914, he joined the Royal Naval Reserve as a Sub-Lieutenant, and was stationed initially at Stornoway. In January 1915, on being given command of a number of vessels, including the Vanessa, to conduct minesweeping and submarine patrols around the islands and seas off the north-west coast of Scotland, he was promoted to Lieutenant Commander. See the log of his time in these waters from January 1915 to July 1915 – click here.

After this posting to Stornoway, he had postings to Holyhead, Grantham, Peterhead and along the South Coast.  During this period, in 1917, he was awarded the D.S.O.

After the war he managed a fishing fleet at Milford Haven.  When this failed during the depression, he went back to sea as a Captain of merchant ships for:

With the outbreak of the 2nd World War, he went on Arctic convoys. By this time he was aged 70.

When he finally retired in 1946, he was a Marine Superintendent of the Constantine Lines.

Had a trawler named after him

In June 1958, Mrs Sheilah Fincham, his granddaughter, launched a trawler for the East Anglian Ice & Cold Storage Co in Lowestoft, Suffolk, that was named after Leonard Cockrell. Later that year, on Trafalgar Day, both of them went on sea trials with this trawler. This was followed by Leonard spending 10 days aboard, deep sea fishing in the far North Sea. This was to be his final sea voyage as he died later that year on  27th December 1958.