Berkley makes a run for it

Researched and created by Frances Belsham 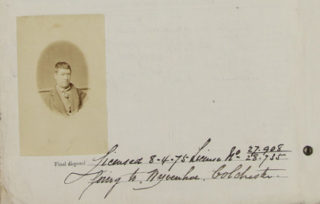 Berkley Sainty when leaving prison on license.
Find my Past 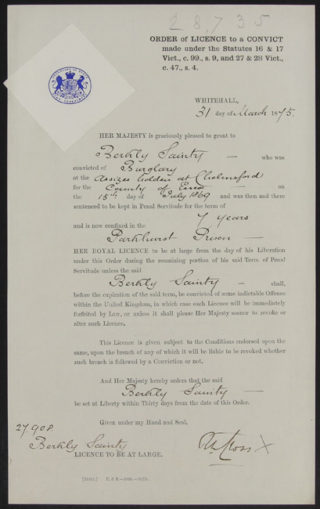 Order of Licence to a Convict

It is less than a year since Berkley Sainty aged 22 was given a sentence of 7 years penal servitude for burglary. He was sent to Springfield goal where on this day, Thursday 5 May 1870, he is in the prison hospital due to ill health. With him is George Thompson aged 37. Thompson is described as a notorious ‘smasher’ with several aliases.

The following is an account of their escape from Springfield goal as reported in a number of newspapers at the time.

On Thursday evening, Berkley Sainty and George Thompson made a very clever escape from Springfield goal. They had obviously spent time planning, gathering equipment they would need and ensuring they would be in the right place to put their plan into action.

They made a hole through the floor of the hospital bathroom which gave them access to the hospital airing yard. They then scaled the wall which surrounded the hospital. The wall was 8 -10 feet tall. From there they climbed on to  part of the gaol roof. All that then separated them from the outer wall of the prison was a narrow path of about 3 yards across.

The outer wall had a stone coping with two sharp angles. They were obviously aware of this fact as they had prepared a firmly knit ladder made from bed tick, (strong cotton or hemp which is stuffed with straw, feathers or anything else to make a mattress) with a strong piece of wood attached to each end, which they had probably obtained from a heap kept for lighting the hospital fire.

One end of the ladder was thrown over the corner of the coping stone. They then climbed the wall drawing up the ladder and using it to climb down the other side and make their escape. They were not missed for some hours until a warder came to check on them at 6 o’clock Friday morning.

By the Saturday morning they had made their way to Wivenhoe and the home of Berkley’s father. Berkley was not on good terms with his father and was overheard arguing with him. They then went to the residence of Berkley’s sweetheart possibly with the intention of getting money to help them to further their escape. At some point they were seen and recognised. The local police had been made aware of their escape from Springfield and were on the lookout for them.

They were spotted entering the grounds of Wyvenhoe Hall where they attempted to hide in the plantations. A number of people along with PC George Hewett went in pursuit of the two men. Berkley and George, on seeing the constable, again attempted to flee. But, by this time, they were tired and saw that to flee was pointless and both men stopped. Berkley sat down on the grass, but George confronted PC Hewett waving his arms in a threatening manner.

He struggled with the policeman until he was overcome and handcuffed, assisted by Thomas Harvey, shipbuilder and Thomas Ham, captain of a nearby yacht. Berkley offered no resistance. Both prisoners demanded food and refused to walk a step further. They were taken to the Park Hotel where they were given food.

They were then taken to Colchester police station by horse and cart and the same afternoon were taken by train to Springfield gaol.

On the journey to Springfield, they told the police officers that having escaped from the gaol they came along the High Rd passing through Witham and Kelvedon, branching off through Tiptree heath to Layer, Abberton, Fingringhoe and then to Wivenhoe.

On route they had met a man named Hutton who knew them. He himself had been convicted 6 months previously for stealing some wheat at Layer, so possibly knew them from prison. He gave them some money to get some beer and told them the best way to go.

On leaving Abberton, between 7 and 8 o’clock on Friday evening, Berkley felt so tired and ill that they stopped to rest in a haystack near Mr John Bawtree’s residence, until about 3 o’clock on Saturday morning, when they continued their journey. While they were hiding in the haystack they heard a policeman pass. They were  amused at having fooled him.

They passed Abberton Lion, down the road to Fingringhoe ferry and across to Wyvenhoe in a punt which they found lying there.

They said they saw six policemen on their journey and ‘challenged’ them all, but they were not stopped. Thompson said he was a fool for coming along with Berkley that way. He wanted to go to Chatham and then to Dover and from there to Calais. Thompson told Hewett that when he took him, he looked for a stick, but he could not find one or he would have given him a ‘hot-un’. But with the other people coming up it was no use to try to get away. Besides which they were very faint with their long journey and also hungry.

Thompson also said that he brought a poker away from the gaol and carried it as far as Fingringhoe where he threw it away and he intended if anyone had stopped them at night to have broken their heads with it. He said he would as soon be killed and that the train should run over him, rather than go back to gaol. He added that he should soon be out again for no prison in the country would hold him.

They said when they were captured they were making their way along by the Hythe to Colchester and were going round by Ardleigh to Suffolk.

Berkley told the officers if they had got down to Wyvenhoe in the night time they intended to have broken into Captain Pratt’s house where they should have got a haul and they would have got a fresh rig of clothes and started off, but Berkley turning up ill on the road frustrated their plans.

On the 6th of June 1870, following his attempted escape, Berkley was sent to Pentonville prison. He had tried a second time to escape from Springfield without success. Perhaps this was the reason for being sent to Pentonville. Berkley would spend at least a part of his sentence in Parkhurst prison on the Isle of Wight, where he seems to have behaved well as he was released on License a year before the end of his 7 year prison term in 1875.