You are here: Home>Topics>People>Other People>About Don Hirst who died in 2015 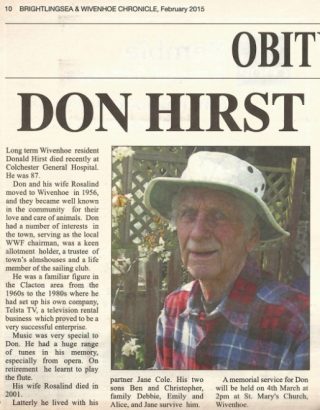 The obituary published by the Brightlingsea & Wivenhoe Chronicle in February 2015 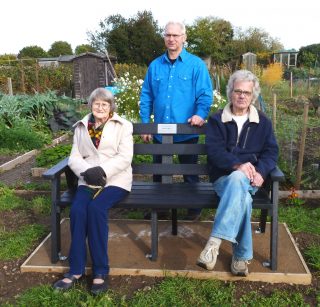 Don Hirst passed away early in 2015 aged 87. He was a great character. I first got to know him as Chairman of the Wivenhoe Carnival in the early 1980s when Don, who was Chairman of the the Wivenhoe Branch of the WWF dressed as a Panda to join the Carnival parade and walk around the streets of Wivenhoe. I remember that day being exceedingly hot; we had to keep stopping the parade of floats and people on foot to give them a drink. Poor Don must have been melting in that full-length Panda costume. I remember being in awe of him for keeping going that afternoon as it must have taken us two hours to get round the streets of Wivenhoe.

I got know him better in 2002 after we merged the two almshouse charities in Wivenhoe. I found myself as Chairman of this merged charity, which we called the Wivenhoe Housing Trust, and he was the trustee who lived very close to the almshouses in Rebow Road. It was very convenient to have someone living as close to them as he did, and he never minded popping over there to sort out some small issue or other. He was good natured like that and always very helpful.

He was always passionate about his allotment and there is a memorial bench at the Allotments that Jane Cole, his partner during the last 13 years of his life, had organised.