You are here: Home>Topics>People>Other People>About Faith Ressmeyer who died in April 2015

About Faith Ressmeyer who died in April 2015

Born in the USA but a Wivenhoe resident for many years. She was an inspirational, fun person; 300 people attended her Memorial Service after her death in April 2015. 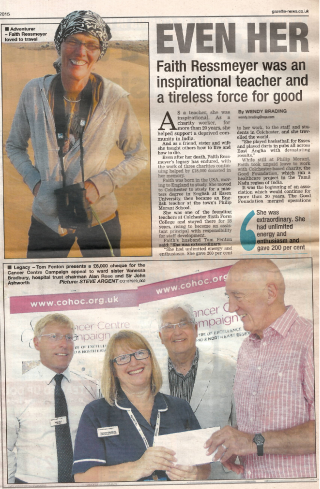 About Faith Ressmeyer
Published by the Gazette on 6th July 2015 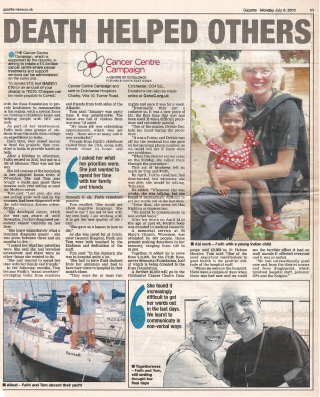 About Faith Ressmeyer
Published by the Gazette on 6th July 2015

Faith Ressmeyer came to the University of Essex from the USA to study for a Masters Degree in English, and stayed here.

She first became an English teacher at Philip Morant School before becoming one of the founding teachers at the Sixth Form College. She stayed there for 23 years eventually become Assistant Principal with particular responsibility for staff development. She retired from teaching in 2010.

As the headline put it in a double-page spread published by the Gazette newspaper on 6th July 2015, Faith Ressmeyer was ‘an inspirational teacher and a tireless force for good’. She did much with her life as the article describes.

Following her death on 12th April 2015, after being diagnosed with cancer six months earlier, a wonderful tribute to the significance of this lady was the fact that 300 people attended her Memorial Service in St Mary’s Church, Wivenhoe.  £18,000 was raised In her memory as a result of that service.