A tribute given by Lewis Footring at John's funeral 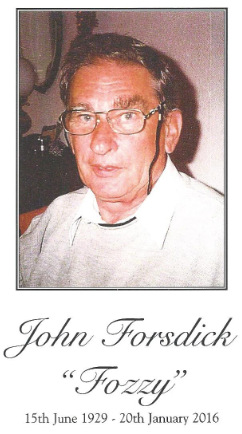 I don’t suppose anyone knew John very well. He never imparted much information about himself.

I first met him, many years ago at Pam & John Dan’s house in the High Street, when he was spending his time on leave from whatever Civil Engineering contract in a distant part of the globe. He was a friend of Pam’s father, who also spent time working abroad. I seem to remember they had met up in West Africa.

He seemed to take a liking to Wivenhoe and its free living ways. They were the days of the Wivenhoe Arts Club. Many of you will have heard that the Arts Club was a den of iniquity where little else but drinking and wife swapping prevailed. That report, as Mark Twain might have said, was greatly exaggerated. John and I repaired to that bar on many an occasion to partake in the drink & the interesting  conversations to be had there with people from a great disparity of backgrounds.

Over this period, John and I had become good friends, seeming to share an offbeat sense of humour.

One occasion which I still recall was when I introduced him to the Saturday market, held at the bottom of North Hill in Colchester. I say market, it was in fact two markets. Stanfords ran a large Farmer’s Livestock market on the South side of the river auctioning cattle, sheep, pigs etc. On the North bank was Watsons, also auctioneers but in a smaller way, selling ‘deadstock’ and wildfowl, shot & trapped rabbits, hares…..I think you get the picture. John loved pheasant. At Watson’s that morning was about a dozen shot pheasants for which John was the highest bidder. As such, he should have had the first pick for as many as he wished. The locals immediately sensed John’s unfamiliarity with this right and piled into the heap seizing the biggest & best in a flurry of activity & feathers leaving John with a couple of the meanest, leanest, scrawniest pheasants you ever did see. Being more familiar with auction custom, I complained on John’s behalf. The Auctioneer tried but failed to right the situation as said pheasant-filchers had disappeared into the crowd.

John was furious. It was much later in the day until the hilarity of the situation became obvious to us and, after a few ‘snifters’ of scotch, the whole episode had us rolling about in paroxysms of laughter.

His many journeys around the world led to longish absences from Wivenhoe. There were bridges and roads to be built in far-flung places such as Hong Kong, Nigeria, Rhodesia or Philipines. I guess they must have been fairly remunerative apart from one notable exception. Turkey. Istanbul, it seemed, led to one of the only complaints I ever heard from him. Yes, he said, I’m working in Istanbul, but the bastards are paying me at Constantinople rates!

Note:  John Vernon Forsdick passed away peacefully in Colchester General Hospital after a short illness on 20th January 2016 aged 86. I think that John had a very full and varied life over a good many years.  He never seem to have stayed in one place long enough to get himself married, but was content here in Wivenhoe as Lewis suggests in his text above.  Peter Hill