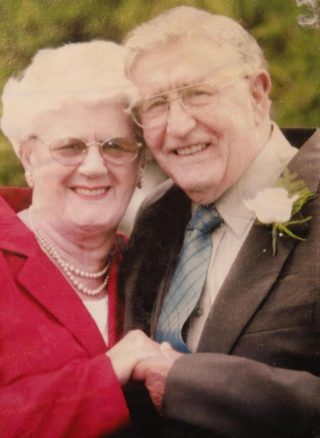 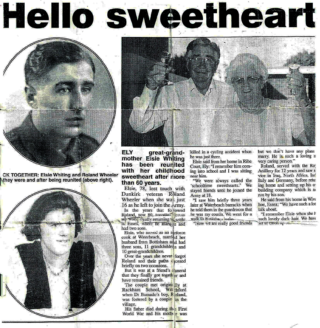 The newspaper cutting which reported on Elsie and Roland Wheeler's story 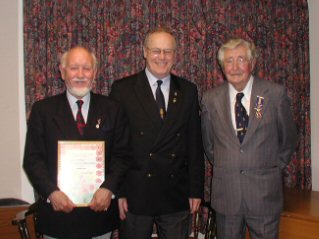 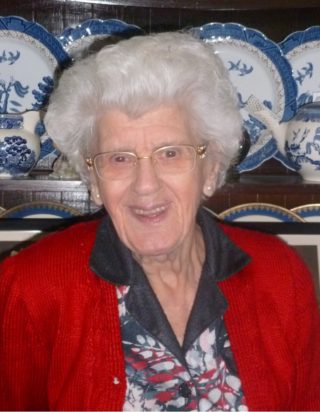 Elsie Whiting and Roland Wheeler grew up in Witchford a village near Ely, Cambridgeshire, where they both attended Rackham village school. Elsie was born 1922 and Roland 4 years earlier in 1918.

The school had two classrooms formed by dividing a hall with a thick curtain.  Elsie found herself on one side of this curtain, in the class with the slightly younger children, whilst Roland was just on the other side of it. Roland always had a touch of the mischievousness about him, which continued through his long life, used to pass notes under this curtain to Elsie, who would scribble a reply and return them.  Elsie said:  “We were always called the ‘school-time sweethearts”.

This relationship turned into marriage in 2001, some 70 years later.

War caused Elsie to go one way and Roland another

Roland joined the army before the war when Elsie was just 16. He was 18 and served with the Royal Artillery for 12 years. He was a Dunkirk veteran and saw service in Iraq, North Africa, and also in Italy and Germany.

Elsie joined the Royal Air Force and served as a cook at Waterbeach barracks.  She said: “I saw him briefly, three years later at the barracks, when he told them in the guardroom that he was my cousin. I remember we went for a walk to Bottisham Locks”.  They had a lot to talk about.

Elsie went on to marry her husband from Bottisham and had three sons who gave her 11 grandchildren and 10 great-grandchildren. Elsie stayed in Ely during this time.

Roland eventually found himself posted to Wivenhoe where he met Iris Scott and settled, had two sons, and established a business in Wivenhoe making concrete blocks (Wivenhoe Concrete Products which was situated at the bottom of the KGV playing fields between it and the railway line. He sold it in the 1960s and a large red-brick house erected on the land in its place). Roland later established a building company which is now run by his son Graham.

At this funeral, a friend of Elsie’s said: ‘you know that man don’t you?’ “And I didn’t recognise him at all until he said ‘you can’t be my Elsie, can you?’. Then I knew it, it was my Roland and we just talked all day.  “I would never have known it was him.”

After the funeral, the pair began visiting each other, but soon decided to move in together in Wivenhoe. Elsie said: “I decided to give up my home and come to Wivenhoe with him.

“But being from the old school, we didn’t believe in living together without being married, so we got married at Colchester Register Office in 2001.

“It was a very happy day for us when I settled in Wivenhoe with him. He was such a loving and a very caring person”

Sadly, Roland died in May 2014, aged 95.  Elsie has stayed in Wivenhoe. She added: “We had 14 really happy years together and I would not change it.”

Roland, or Roly as he was usually called in Wivenhoe, was a prominent member of the Wivenhoe branch of the Royal British Legion and a leading member of the Colne Lodge of Freemasons in Wivenhoe.

As at November 2017, Elsie was 95 and still going strong, living in the cottage in Elmstead Road that she and Roland, as she always called him, had shared since marrying him in 2001.