The first Wivenhoe Players production in 1969

Wivenhoe Players was founded by Clare Abrahall in 1968 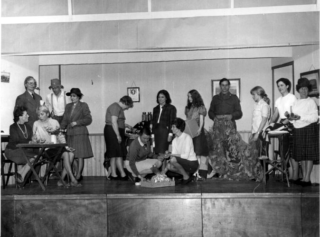 The first Wivenhoe Players production in 1969 - The Great Day

In 1968 notices went up in the pubs that Clare Hoskyns Abrahall was starting a drama group.  In spring 1969 they put on their first play “Great Day” by Lesley Storm.  The performances were sold out.

In the “Winslow Boy”, Joy Heasman and Paddy Bane were standing behind the scenery and saw a wire sticking out which they pulled only to hear a loud crash.  A picture fell to the floor on the set narrowly missing Chris Cudmore.

In 2000, at the Brantham one act play festival, Paddy Bane was awarded “best actress” for her part in “Say something happened” by Alan Bennett.