You are here: Home>Topics>Activities of the WHG>4 Major Projects of the WHG>Wivenhoe's Pubs & Beerhouses>George Joseph Hillyard - Landlord of The Shipwrights Arms for 44 years

George Joseph Hillyard - Landlord of The Shipwrights Arms for 44 years 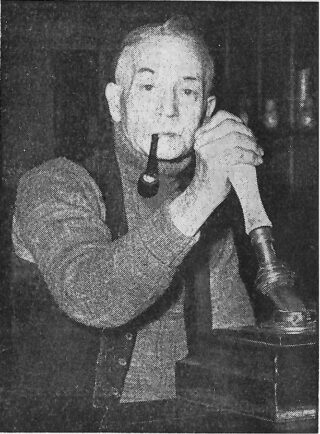 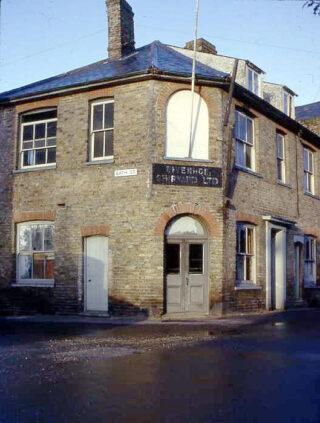 The Shipwrights Arms before it was demolished in 1973. It was situated on the corner of Bath Street and West Street.
Photo: Don Smith's Collection 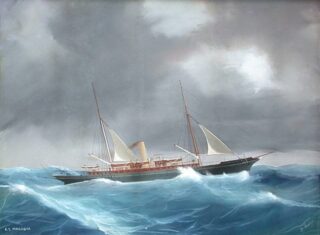 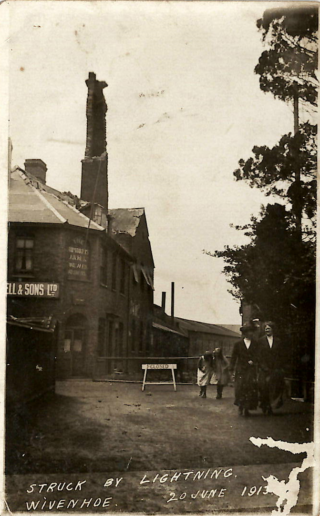 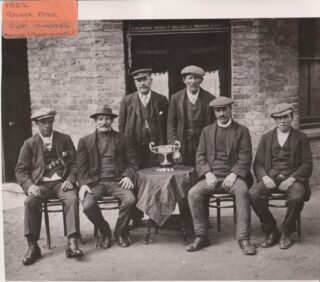 George is the one standing with the cheese cutter hat and watch chain. The photo was taken outside The Shipwright Arms in 1922 to celebrate winning the Smack race which were fast fishing boats under sail. The wording above the door states: “George Hillyard licensed to sell beer and tobacco”. The man on the far left is Johnny Turner
Photo: Wivenhoe Memories Collection 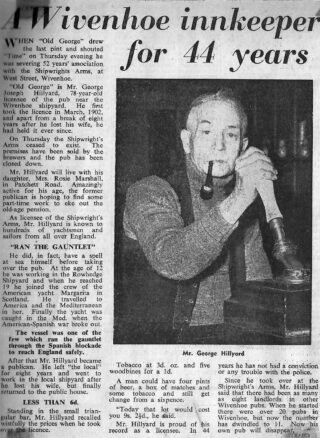 George Hillyard, or Old George as he became known, ran the pub called The Shipwrights Arms in West Street for 44 years. He finally had to retire at the age of 78 in 1953 when the brewery, Daniell & Sons, decided to close the pub.

One of eight children born September 1875

George was born in East Donyland (Rowhedge) on 10 September 1875. He was one of eight children born to Henry and Mary Ann Hillyard. The Hillyard family had strong maritime links and at the age of 12 George was working in the Rowhedge shipyard.

Served on the Steam Yacht Margarita

Marries a Wivenhoe girl in 1901

George married a Wivenhoe girl, Sarah Margaret Goodwin, at St Mary the Virgin Church on 15 May 1901, and almost a year later in March 1902, he took the licence of The Shipwrights Arms in West Street, Wivenhoe. George and Sarah had a daughter called Margaret Rosina (known as Rosie) in 1904.

George rented The Shipwrights Arms from Daniell and Sons (the brewers), for £22 per annum and the tax was paid of 14/8d. George accumulated a property portfolio of his own and was renting out four houses in West Street in 1912, with a total rental valuation of £12.

The pub was badly damaged in 1913 due to lightning

Early one summer morning in 1913, lightning had struck a chimney in the nearby Rennie, Forrestt shipyard. No one was hurt, but the ceilings and furniture at The Shipwrights Arms were badly damaged by tumbling bricks. A brief report in the Essex County Standard stated that “A lady who was mangling in the attic had a miraculous escape”.

George maintained his maritime interests; he owned cutters (smacks) called Daisy CK6 from 1905 and Maria from 1915. George was a regular competitor in the Wivenhoe and Rowhedge Regatta, he came second in the single-oared sculling race in 1892; his smack Daisy suffered a mishap when its top-mast was carried away in a gust of wind in 1909, although George was victorious in 1922 when The Shipwrights Arms celebrated winning the Smack race, which were fast fishing boats under sail. See picture of him celebrating outside of The Shipwrights.

He ran the pub for 44 years

George left The Shipwrights Arms when his wife Sarah died in 1927 (at the age of just 47), and he returned to work in the shipyards. He took up the licence for The Shipwright Arms again around 1935 and was married again to Marjorie Margaret Mawdsley (nee Cudmore) in 1940. George remained the landlord of The Shipwrights Arms until 1953 when the pub was closed after the brewers decided to sell the premises. George died in 1967.

With the big yachts tucked away safely in their mud berths on the high springs of autumn, regatta day was eagerly anticipated as the gayest in the waterside villages’ calendar. Its races for small yachts, gigs, cutters, shells, sculling, pulling, watersports and general horseplay, not to mention the fairs, were all overshadowed by the highlight of that day – the smack race – annual tussle between the champions of the various local villages, competing for the first prize of £8, and the greater honour of being crack smack of the fast and able Colne and Blackwater fleets.

Assessments in 1909/10 have a George Hillyard renting The Shipwrights Arms in West Street from Daniell and Sons [the brewers]. This had a rental valuation of £22 per annum (pa) and tax was paid of 14/8d. The records for this property continue up to 1922 with similar figures each time.

From 1912 George Hillyard was renting out 4 houses in West Street with a total rental valuation of £12. He was assessed at 8/- but as his income was under £400 pa he was exempt from paying.

4.  Extracts from the book of the ships built on the Colne by John Collins 2009:

Built by an unknown Brightlingsea builder: