A tribute to a lovely lady who was respected by everyone 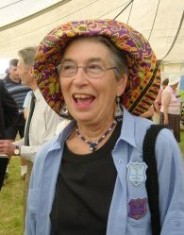 Jean Harding at the Tendring Show 2003

This text was written and read by her son Graham Harding at Jean’s funeral on 16th July 2008.

Her father, Duke, was a brilliant chemist and later one of the founders of ICI. Jean was thrilled to discover earlier this year that his ground-breaking and highly successful book on Organic Medicinal Chemicals has just been re-published. Her wise and warm mother, Thea, was the beautiful daughter of Captain Thomas Wood, a South Seas trader captivated by the youngest daughter of a family emigrating to New Zealand. They married in Wellington and sailed back to Scotland , where Jean’s mother was brought up.

She left school at 16 in 1939 and believing that University would be an irrelevance at such a time went instead to a train in domestic science in Manchester. She became one of the Ministry of Food’s demonstrators talking to audiences across the country about healthy eating.

Jean Harding with a purple streak in her hair

I found on Saturday a few lines in her handwriting on old age (which she disliked). The last line was this: ‘old age is dying your hair purple’. And that’s what she did. She never gave in to age or conventions.She had beauty, style and attitude – and a wonderful smile – to the very end.