Transcription of the Register of Electors for Wivenhoe, 1918 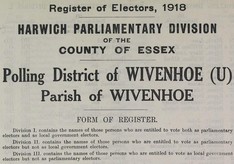 The electoral register of 1918 marks the point where many more women than previously were allowed to vote in local and parliamentary elections, though they still had to wait another ten years to be granted parity with men.

The register is available online at the SEAX site of the Essex Records Office as a set of scanned images of the pages. We have now transcribed the records for Wivenhoe in order to make the information easier to work with.

We have prepared our transcription in the form of a pair of spreadsheets, though we can also generate other formats if needed. One spreadsheet of the pair lists people in alphabetical order of surname while the other gives the same information but with people grouped by their addresses. In each case the information from all three subdivisions is combined.

There is one added feature in the spreadsheets, which is that there are extra address columns to the right of the main information. These generally contain the address information as entered, except that where an address was given as just a house name we have added the street if we have been able to determine it.