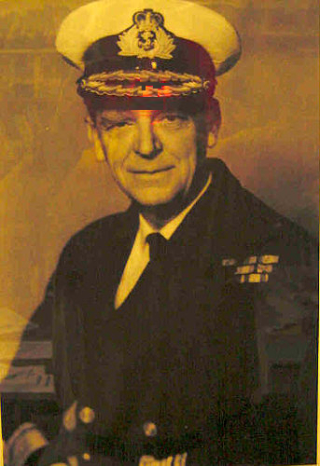 Rear-Admiral John Lee-Barber, who was one of the most successful and aggressive destroyer captains of the Second World War, lived the last 14 years of his life at Wivenhoe, on the Quay, in Ferry House.

He was born 16th April, 1905 and joined the Navy as a cadet in 1919. His first destroyer command came in 1937 with Witch, followed by Ardent. From 1939 to 1942, he distinguished himself in charge of Griffin in the Norwegian campaign during which the Griffin captured the German trawler Polaris, disguised in Dutch colours and carrying much intelligence material that proved invaluable to later naval efforts.

Later, the Griffin was to evacuate Polish troops from France, for which Lee-Barber was awarded the Polish Cross of Valour. He received the DSO in 1940 for his efforts in anti-invasion patrols along the English Channel.

In the autumn of 1940, the Griffin was sent to the Mediterranean where she was involved with much action, including escort duty for convoys going to Malta in 1941.

When he left the Griffin early in 1942, Lee-Barber was naval advisor to Southern Command Army Headquarters Home Forces, but in September he took command of Opportune in the 17th destroyer flotilla, escorting convoys to and from Russia. On 23rd December 23rd, Opportune took part in the high-speed chase of the German battlecruiser Scharnhorst by ships of the Home Fleet in the Arctic. He was mentioned in despatches for two torpedo hits on the German boat.

From 1944-46, Lee-Barber was executive officer of HMS King Alfred, the RNVR officers training establishment in Hove. Subsequently he went back into commanding destroyers, first St James and then Agincourt.

From 1950 to 1952 he was naval attache in Santiago, Lima, Bogata, and Quito, and from 1954 to 1957 Commodore in Harwich, in command of the inshore flotilla. His last appointment, in 1957, was as Admiral Superintendent, Malta, at a time of unrest there, returning in 1959, the year he was appointed CB.

John Lee-Barber disregarded every rule of good health, smoking 40 cigarettes a day and drinking copious glasses of gin. Like all successful wartime destroyer captains, he had tremendous physical stamina, and was able to stand on bridge for hours on end and go for days without proper sleep.

In the Old Wivenhoe Quay development, Wivenhoe Town Council named a road  ‘Admiral’s Walk’ after Rear-Admiral John Lee-Barber who was a well-known character in lower Wivenhoe, known affectionately as simply ‘the Admiral’.

Note: This short biography was first published in the Wivenhoe Encyclopedia