Rifleman Harold Harlow showing him in his emergency blue uniform prior to the issue of khaki service dress.
Photograph from Barbara Hester, Harold Harlow’s great niece 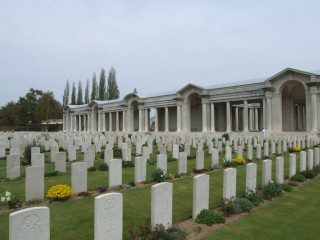 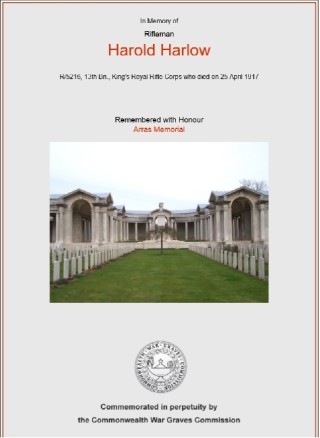 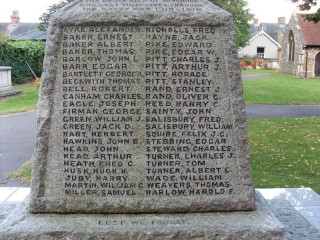 Harold was born in 1891, the third son of eleven children born to Master Mariner Frederick George Harlow and Harriet Shead.

Born in Wivenhoe on 20th January 1891, he was baptised on Easter Sunday. The family lived in Alma Street but, following the death of his mother in 1906, Harold left for London finding employment as a salesman in a Boot & Shoe shop and living in lodgings at 22 Warwick Gardens, Haringey Park, North London.

One of the first men to enlist for WW1

He enlisted at Hampstead as a rifleman in the Kings Royal Rifle Corps on 15th September 1914, was given the number R/5216 and placed in C company of the newly formed 13th Battalion which was then under canvas and training in Great Missenden.

Initially he perhaps wasn’t always a model soldier, he went AWOL for 5 days just after completing his initial training, and he failed to comply with an order just before going overseas. For both these offences he was docked pay and for the latter offence also given Field Punishment No 2. This would have involved placing him in fetters and handcuffs but allowing him to continue marching with his unit.

His Battalion landed in Boulogne on 31st July 1915 and things changed immediately. They marched across France before suffering heavy casualties in the assault on Loos at the end of September, and were entrenched through the winter of 1915, which was particularly wet and cold.

There are many references in the Battalion war diary to the trenches being pumped out. They suffered a gas attack in June 1916 and were involved in heavy bombardment during July being particularly mentioned for their involvement in the attacks around Pozieres.

Success at the Somme in October 1916 although at a price

A brief lull was followed by a return to the front line in October and more wet weather. Between 13th and 20th November there was a very successful attack on the enemy near Beaucourt village as part of the battle for the Somme. They captured many prisoners, destroyed a number of enemy gun posts and established a strong defensive position. Casualties were high, both wounded and killed.

“After occupying a prominent place in the Somme fighting line during the past strenuous and successful week the Battalion has made a reputation for itself and has earned the thanks and praise of the Brigadier.” For this action Harold, along with 52 other men, were individually Mentioned in Dispatches for their “gallant conduct”.

They immediately marched towards Arras, the ground here was wetter than before and the trenches worse. Now came the build up to the battle for Arras which took place between 23rd and 30th April.

A much depleted C company were in the thick of the attack to the East of the town making good headway but reinforcements were slow to arrive. They came under a gas attack and heavy bombardment on 24th near Gavrelle. Things quietened until the early hours of 25th when a mutual heavy bombardment took place.

At first light an aerial attack was launched with one German and two British planes being brought down. The signallers received a direct shell hit with two killed and five wounded and with their position at risk there was a withdrawal. Heavy fighting continued. It was during this day that Harold was killed, aged 26. Whether this was during the morning bombardment or whether he was a signaller killed later I do not know. He has no known grave.

He is listed on the Memorial at Arras

He is listed in Bay 7 of the Memorial at Arras in Faubourg d’Amiens Cemetery. He was entitled to the 1915 star, British war medal and the Victory medal, affectionately referred to as Pip, Squeak and Wilfred, and these were sent to his eldest sister, Annie.

His name was added to the Wivenhoe War Memorial later

When the Wivenhoe War Memorial was unveiled on 19th June 1921 his name was not originally included but added, out of order, at a later date. This also presents a conundrum. His name is inscribed Harold F Harlow. The reason for the inclusion of a middle initial, which he did not have, is a mystery.