Reported in the Caledonian Mercury on Monday 6 July 1789 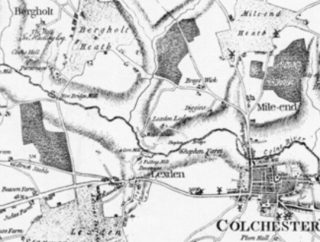 Extract from Chapman and Andre Map 1777

On Monday morning last a duel was fought at Lexden Heath, near Colchester, between Mr Corsellis of Wivenhoe, and Mr Crickitt, Member for Ipswich.  The cause of dispute originated in some severe language with which the former addressed the latter at Colchester on Saturday last. Mr Corsellis, after receiving Mr Crickitt’s shot, fired his pistol in the air; on which Mr Crickitt expressed himself satisfied, and the affair here terminated. Mr Tyson was second to Mr Corsellis, and Mr Middleton to Mr Crickitt.

Sourced from the British Newspaper Archive