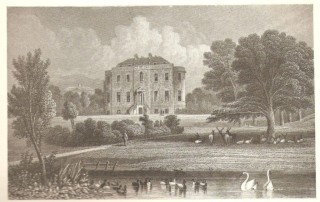 Barber's 1835 print of Wivenhoe Park, showing Wivenhoe House as it was later to be known
ERO I/Mp 411/1/2 by courtesy of Essex Record Office

Washington State University hold the digital collection of 117 letters written by Mary Martin (Rebow) to her first cousin Isaac (Martin) Rebow between 1767-1779. The earliest letters (1767-1772) were written during their clandestine courtship and the later letters (1778-1779) during their marriage. In the early letters Mary describes her life with family and acquaintances, her difficulties in finding suitable servants for her aunt Mary who was also to become her future mother-in-law, and her management of their London home in Duke Street. In her later letters she describes running the farm at Wivenhoe Park and speaks of her two eldest daughters.

To view the complete collection at the Washington State University Digital Collection go to
http://content.libraries.wsu.edu/cdm/landingpage/collection/p16866coll11

Mary Martin [1737-1804] was the granddaughter of Captain Matthew Martin and you can read more about the family here.