You are here: Home>Topics>People>Who Lived in Wivenhoe in the 18th Century and What Did They Do?

Who Lived in Wivenhoe in the 18th Century and What Did They Do? 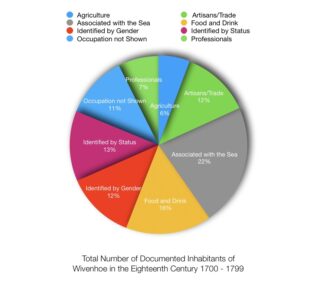 Who Lived in Wivenhoe in the Eighteenth Century and What did they Do?

Many books have been written about Wivenhoe in general and there are a number of useful resources which more specifically relate to the eighteenth century.

There is an excellent transcription of the parish records of St Mary the Virgin Parish Church in Wivenhoe compiled by Helen Barrell. This includes material from 1560 onwards listing the births, marriages and deaths of people who lived in Wivenhoe and can be viewed on the Wivenhoe History Archive at https://www.wivenhoehistory.org.uk/content/topics/people-2/births-marriages-deaths.

In terms of property and who owned what, myself, and Clive Dykes and John Foster (from the Wivenhoe History Group), with some additional palaeographic assistance from Patrick Denny transcribed the 1799 Survey Map of Wivenhoe  – ‘A Survey of the Manor of Wivenhoe in the parishes of Wivenhoe and Greensted with parts of the manors of Cockaynes and Kelars als Rebandishyde in the parish of Elmsted’. This provided a fascinating snapshot in time – a complete picture of the manor in 1799. It shows 113 numbered parcels of land in the parishes of Wivenhoe, Elmstead, and Greenstead, complete with acreage details and a descriptive key listing the names of the properties, names of the owners, occupiers and tenants and whether the land was ‘in the Lord’s hands’, copyhold or freehold. See https://www.wivenhoehistory.org.uk/content/topics/resources/maps-of-wivenhoe/1799-survey-map-wivenhoe.

Other key material can be found in the Victoria County History of Essex Volume X; Chapter Four of Butler’s ‘The Story of Wivenhoe’, which concentrates on the eighteenth century;  and other historic books and pamphlets many of which concentrate on the maritime history of the town. In particular there is the excellent analysis carried out by A. F. J. Brown in ‘Essex At Work 1700-1815’ which explores the economic development of six towns including Wivenhoe. This includes references to: agriculture, artisans, breweries, doctors, enclosure, Friendly Societies, inns, maltings, the mill, oyster fishery, parish government, poor relief, population, ropery, sail-making, schools, sea-water baths, shipbuilding, smallpox, smuggling, tannery, vaccination and the workhouse.

This new list covers very much the same ground as Brown’s review of the economic development of the town but could be seen more as the warts and all data from which his review has been compiled. It draws on the same major collections used by Brown and other researchers but It includes all the documented individuals, whatever their occupation to give a more complete picture.

How the Data was Collected and Organised

The details, including names, occupations and sources have been taken from the huge collection of Quarter Session Rolls, Wills, Conveyances, Mortgagees, Deeds, Leases and Releases, Marriage Settlements, Parish Records, and Account Books at the Essex Archives; Probate Wills, Litigations, Family Papers, Settlement Records and Indentures at the National Archives.  The British Newspaper Archive brought a different flavour to the list with its idiosyncratic collection of items in the Ipswich Journal and Chelmsford Chronicle, ranging from news about key local events, auctions, and the sale of property, to amusing anecdotes about individuals. The Alehouse Recognizances delivered lists of licensees and the Colchester Poll Books gave an indication of those worthy citizens who were eligible to vote. It might be argued that there should be another column citing all those other free floating documents which have not been subsumed into existing major collections.

The list is in chronological order and has been divided into four quarters in order to try and capture any noticeable changes of status or occupation during the century. The categories are the same for all four quarters.

The total figures for each century give an idea of the number of documented inhabitants. This can be compared to the recorded population at the time. The Victoria County History of Essex states that ‘In 1723 the rector reported a population of c.110 families, which if accurate indicates a fall in population [from the late seventeenth century], but in 1758 about 161 houses were assessed for window tax, suggesting subsequent growth.  In 1766 the rector reported 182 houses. Eighteenth-century burials, which included those of victims of smallpox epidemics in 1726 [49], in 1762 [35] and in 1776 [20], exceeded church baptisms, but there may have been many nonconformist births in addition, and immigration apparently exceeded emigration, so that population increased to 1,093 in the 1801 census.’

Brown suggests that in 1700 the number of inhabitants was about 700 mainly centred around the quay and mostly involved in the maritime industry, including fishing and ancillary trades such as sail making and the roperies. During the century coal yards expanded, the number of granaries increased, and the oyster trade also began to flourish.

The documented inhabitants shown on the new list reveals the fatal flaw in trying to relate this to the recorded population figures. The list is noticeably skewed towards male inhabitants who were mainly documented with little reference to their often sizeable families or households; women themselves often only being referred to by their relationship to their menfolk or their marital status – the most frequent in this list being ‘Widow’ with the odd ‘Lunatic’ being thrown in for good measure when a female inhabitant was proving inconveniently difficult.

a) Because the list is compiled from documentary references this means that a number of inhabitants may appear more than once depending on the documentation but these references have all been kept to add to the general picture of what activities the inhabitants were engaged in. On the other hand where references were taken from the British Newspaper Archive where adverts were frequently repeated over a number of issues or series of publications, these are only shown once.

b) Where inhabitants names are listed more than once it is advisable to be cautious. Although this is almost certainly referring to the same person it may also be referring to a son or close relative who has the same name and occupation.

d) More documentation was introduced during the later eighteenth century. The Colchester Poll Books for instance commenced in the late seventeenth century following a 1696 act of Parliament designed to curb disputed election results and fraud. The remedy included requiring sheriffs to make a list of voters and the candidate they voted for in county elections. These could then be published as poll books. Poll books did not list all residents of an area; only those who were freeholders and fulfilled the property requirements for the franchise; and poll books list only those who actually cast a vote. The earliest Poll Book containing details of Wivenhoe voters was dated 1741 (occupations were not sited in this edition so they add to the Occupation not Shown category in the second quarter).  The next Poll Book details dated 1768 appeared in the third quarter of the century and the earliest Alehouse Recognizances listing licensees of public houses in Wivenhoe in 1769. The fourth quarter however contains detailed Poll Books for 1781, 1784, 1788 and 1796 while the Alehouse Recognizances are scattered throughout the quarter. This gives the impression of a surge of inhabitants from certain dates whereas they were simply being consistently and repeatedly recorded for the first time.

e) Some of the documented inhabitants have more than one occupation and in this case each occupation is counted separately e.g. plumber, glazier, housepainter.

It was felt that it would be a useful data resource for researchers to be used in conjunction with other research tools. It does not analyse the results other than counting the total number of documented references to inhabitants and counting their stated occupations or status. What it does offer which is different from other research resources is a broad brush approach to understanding life in the eighteenth century. It doesn’t tell us a story about the documented inhabitants other than that they existed and what their status was at that moment in time but more may be found by using this data as a stepping stool to further investigations by combining it with other resources.

The Victoria County History of Essex (Volume X) published in 2001, can be viewed online at https://www.british-history.ac.uk/vch/essex/vol10/pp274-281#anchorn49,