You are here: Home>Topics>People>Mr and Mrs Pawsey of Ballast Quay House

Mr and Mrs Pawsey celebrate their Diamond Wedding in style 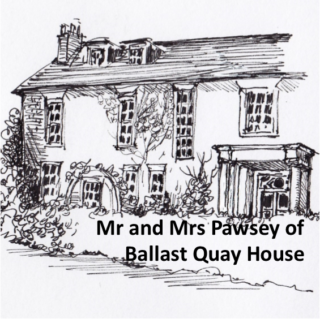 Home of Mr and Mrs Pawsey
Drawing by Vicky Rosenthal

At the Criterion restaurant in Piccadilly, on Monday, twenty five grandchildren, six sons and one daughter sat down to luncheon to celebrate the Diamond Wedding of Mr and Mrs Pawsey of Ballast Quay House, Wivenhoe.

The couple are 85 and 84 respectively. Of their 12 children, ten are living, and they have forty grand-children and two great-grand children. One son was killed in the war.

At the luncheon a telegram from the Archbishop of York was read: ” Congratulations on your sixty years of happy married life, and my benediction on the years that remain.”

Later, a message was received from the King, as follows: ” The King and Queen sincerely congratulate you and Mrs. Pawsey on your Diamond Wedding which you are celebrating today. Their Majesties trust that you are in good health, and spending a very happy anniversary”.