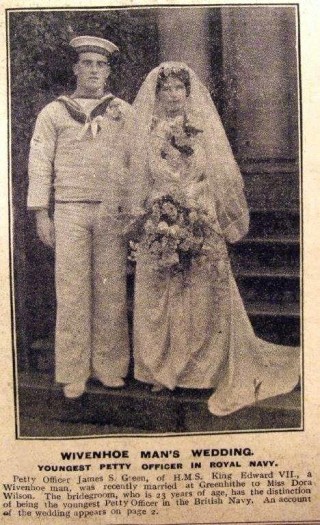 A Wivenhoe man, Petty officer James S. Green of H.M.S. King Edward VII,  married Miss Dora Wilson at Greenhithe.  The bridegroom had the distinction of being the youngest petty officer in the British Navy.  His parents were James and Emma Green of East St. Wivenhoe.  He was lost overboard of H.M.S. Tintagel at Invergorden on the 26th of January 1919, and his body was never recovered.  He left his widow Mrs Doris Green and a daughter Dora. E. I. Green who died in 1934.
Left click on image to read the text.
Source , Essex County Standard.
Researcher Mr. Ian Valentine.