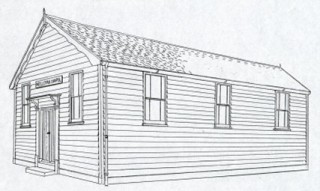 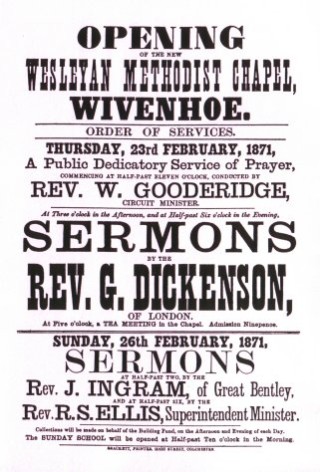 Poster announcing a 'public dedicatory service of prayer' in the new Chapel. 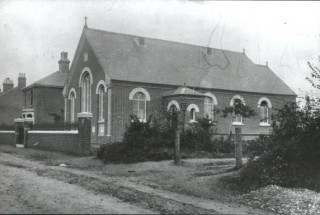 Photograph of the later Methodist Church built in The Avenue in 1901. 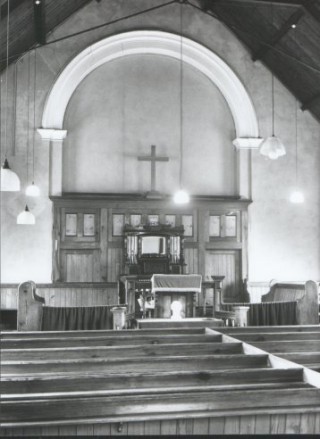 Interior of the Church, probably around 1966, well before the alterations were completed in 1971. 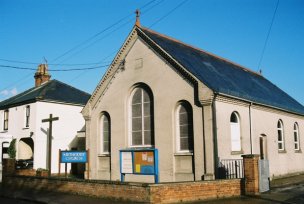 The Methodist Church in The Avenue (as it looked in 2006)
Photo: Peter Hill 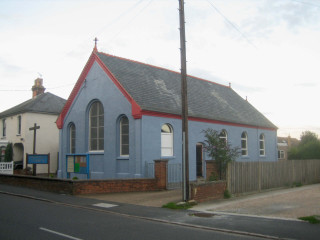 The Methodist Church after redecoration after 2006
Photo: Peter Hill

During the early years of the 19th century the followers of John Wesley, known as “Methodists”, split into two rival groups, the established “Wesleyan Methodists” and the breakaway “Primitive Methodists”. Both groups became established in Colchester and competed to extend their influence in the surrounding area. In many places these Methodists had no building of their own but conducted services in private houses, hired rooms, or in the open air. Both groups were active in Wivenhoe in the late 1830’s. But while the Wesleyans soon withdrew, the Primitive Methodists persevered for several decades.

Towards the end of 1870 the Primitives looked set to buy land and build a chapel. But at the last moment the Wesleyans returned to the village and quickly won what can be seen as a race to build. Despite a muddle over the purchase of the land, the whole project was completed in just seven weeks. What emerged was a wooden-boarded building, situated on the bend in Chapel Road, with seating for 162 and opened in February 1871 (see drawing right, by Geoffrey King). The Wesleyans were now safely established in the village after making very little effort during the preceding 30 years. The Primitives, who had done so much groundwork, withdrew defeated.

Within 10 years there were complaints of overcrowding and discomfort and agitation to build a bigger chapel. Two adjacent plots of land at the junction of Chapel Road and Clifton Terrace were purchased and plans prepared, but no further action taken for over 15 years. Meanwhile the original building survived the 1884 earthquake unscathed.

The project was revived in 1897. Several alternative sites were now considered and rejected. New plans were drawn up for the land in Chapel Road, before the present site in The Avenue became available. Again plans were prepared but builders’ tenders were 40-60% above the architect’s estimate. Further delay ensued while one of the Trustees prepared a simpler specification and undertook to build at a cheaper price. There was a ceremonial stone-laying on Whit Monday 1901 at which contemporary documents and newspapers were buried in the foundations. The new chapel was finally opened in October 1901. Despite initial optimism, it took 25 years to pay off the debt on this new building.

The Chapel Road land and building were eventually sold, the old chapel becoming first the Parish Hall and later the St. John Ambulance Hall, its external appearance much changed in recent times. At the national level, the rival Wesleyan and Primitive Methodist factions finally re-united in 1932.

Electric lighting was installed in The Avenue chapel in 1928 to replace the gas, while 1938 brought electric heating instead of the stove. Otherwise the building changed little in 60 years. After a period of relative prosperity the membership dwindled until in 1959 a proposal to close was narrowly defeated.

Then in the early 1960’s the life of the church was revived by the arrival of a number of new young families. Soon there was interest in renovating the premises. A modest scheme proposed in 1966 was overtaken by the receipt of a bequest which facilitated a more ambitious project completed in 1971. New rooms were built at the rear and the interior of the church was turned round so that the congregation faced west instead of east. New chairs replaced the pews and the exterior red brickwork was rendered over and painted. Two years later a small pipe organ was installed. Recent modifications have improved facilities for the disabled. In 2001 the church celebrated the centenary of the present building in The Avenue and continues to serve the local community.

The above is a summary of the history of the Wivenhoe Methodist Church. The full history of the Church was first published by Geoffrey King in 1988 and a second edition was produced in 2003.