A Seafaring Missionary's Visit to Wivenhoe in 1822

An Extract from the 'Memoirs of William Henry Angas' by Francis Augustus Cox, Google Ebooks, 1835, pp 72-3 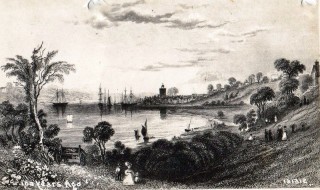 William Henry Angus was a seafaring man, born in Newcastle upon Tyne (6 October 1781- 9 September 1832). Following a dramatic maritime career he became the first minister to have been ordained specifically to serve in seafarers’ mission, or, in the exact wording used, ‘to the work and office of a Missionary to Seafaring Men’. For full details of his life visit the Oxford Dictionary of National Biography: http://www.oxforddnb.com

In 1822 he records his visit to Wivenhoe:

‘I set off, next morning, for a place called Wivenhoe, a sea village about four miles from Colchester by water: giving notice, as I came into the neighbourhood of it, and on board of the smacks I found on the way, that a sermon would be preached to seamen at Wivenhoe. I first addressed myself to Mr. H … the Independent minister at Wivenhoe; but, on stating my object, he did not seem at first to fall in with it. The interest seemed, however, to increase by conversation, and he consented to let me have his chapel. It will hold about 250. The population of Wivenhoe is set at 1600; and another sea-village, about a mile higher up, at about 500: and out of these about 350 fishermen, being the crews of 120 vessels constantly going in and out of the place; yet not more than seven of them attended Mr. H’s chapel! When these points were laid open to him, he only then began to see the sea-field before him, lying till now unoccupied. From this I reasoned on the great importance of the Bethel flag, under which, with his blessing, his place might become crowded and enlarged. I wrote out a notice, and sent round the old bell-man to give out that there would be a sermon at six o’clock. At the time appointed, there came on a tremendous shower, and not more than a dozen were assembled. Mr.H… thought he was not out of his reckoning as to the little interest which the thing was likely to excite; but as soon as it cleared up, a flood of people came, which nearly filled the chapel. Among them were the crews and captains of some of the ships which I visited after sending the bellman, and many belonging to the Establishment, which equally surprised and delighted Mr.H… After a brief exhortation, I gave a long account of the society, its works, its prospects, etc. At the close, Mr.H…  came up and spoke like a new man, pressed the importance of the object, stated his intention of having a Bethel flag, appealed to the ladies for it in particular, and invited the Methodists to draw nigh and unite in the work; so that I trust the foundation-stone is laid, both at Colchester and Wivenhoe, for societies and flags. I left with the friends some Reports and Magazines. I walked home again in the evening, the service closing at about nine o’clock: ….’

[First drawn to our attention by Christopher Thompson]