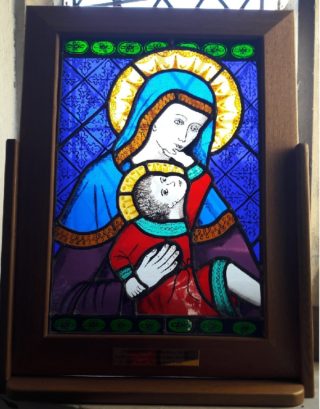 The inscription on the picture frame. 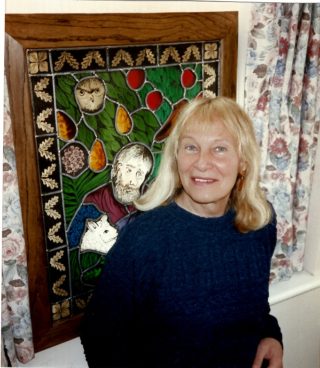 This is a picture of Anne Zemaitis Howard taken in the late 1990s standing in front of another of her stained glass panels, this one of Cain & Abel

I am pleased to publish this memory piece about Anne Zemaitis Howard on behalf of her husband, Roger Howard, who wrote the following text about his wife:

Anne Zemaitis Howard was born in Islington, north London, in 1938, of Lithuanian parents.  She trained at Hornsey College of Art and later studied at North London Polytechnic and the Open University. After a career in teaching in London, Suffolk and China, she moved with her husband, the playwright and poet Roger Howard, to Wivenhoe in 1986. There she began to paint local landscapes and to make embroidered soft toys of real and mythical animals.

In the 1990s, she made a series of stained glass panels under the tutorship of the glass-maker Ben Finn, using old glass.  Shortly before her death in 2016, she gave her ‘Madonna and Child’ to St Mary’s Church. At the time of the Service of Dedication, she wrote an accompanying verse:

Pause awhile before you pass ~
This simple prayer expressed in glass
Is for all mothers to be moved
To love their child as Mary loved.

Note:  This stained glass panel was presented to the Church and was dedicated at a service in 2016. Karl Douzier made the oak frame in which it is displayed. The inscription reads:   Presented to St Mary the Virgin Church by the artist Anne Zemaitis Howard of Wivenhoe on Sunday 18th September 2016