A Colourful Character and Rector of St. Mary the Virgin Church, Wivenhoe in 1890 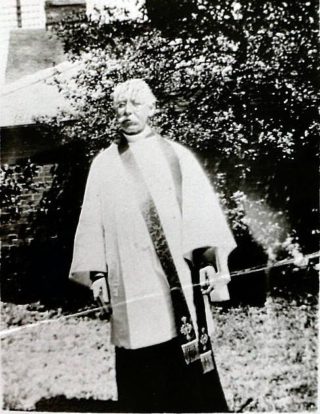 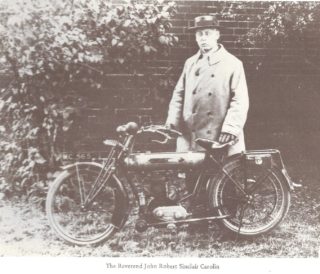 It is said that Rev. Sinclair Carolin was a brilliant Irishman who was Rector of St Mary’s Church Wivenhoe from 1890 – 1922.  He was indeed a colourful character.  He also provided the church gates in East Street to the piece of land given by a benefactor, Mr W.M. Fison in 1923.

Just inside these gates is the neglected ‘Carolin’ garden which is due to be revamped as part of the St Mary’s Transformation Project, an Appeal for which was launched in 2018.

He lived in the rambling Old Rectory (now converted to flats in Croquet Gardens) with his wife who was confined to a wheelchair, and their three children George, Mildred & Dorothy.

After his wife died he never lacked female company, and people said that he gave the ladies chocolates and even an autographed copy of his photograph.

It is said that he liked wine, women and song. On one occasion he was asked why he had shaved off his moustache and he replied “Better for kissing.  At least so I find with the village girls”.

He could often be seen riding around the parish on his shiny motor cycle. The Rector was certainly a character!  He made regular news in the Essex County Standard.

“The Daughter who eloped”

In 1906, it was his eldest daughter Mildred’s turn to hit the headlines in the Essex County Standard. She had eloped with a curate from St. James’ in Colchester.

The Rev. John Wycliffe had failed to impress her father who had hoped his daughter would marry a rich man.

The Rector, opposed to this relationship, had opened her love letters and poems, which Mildred thought was very unreasonable. However the lovers were not deterred and sent their letters instead to local post offices in Rowhedge & Fingringhoe. Mildred then used to cycle there to collect them. When Rev. Carolin found out he was not at all pleased and so he removed the pedals from her bicycle. The couple did elope and got married in London and eventually Rev. Carolin forgave them.