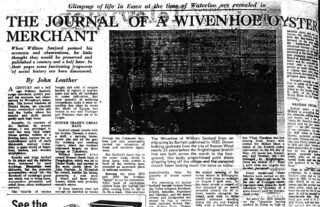 He had a daughter, Elizabeth and a son, William to whom he left most of his estate.

There was a bequest made to the rector of St Marys Church of fifty shillings to be paid yearly on Christmas day.

The money was to be used to buy bread which would be distributed in equal shares to 10 poor persons of the parish. He stipulated that they should be in the habit of attending the Communion Table of the said church and receiving the holy Sacrament of the Lords Supper.

Williams son died two years after his father and much of his estate went to Thomas Sanford.

Steward Hines: former owner of land, deceased at time of will

Proved at London 25 February 1831 before the Judge by the oaths of
William Sanford the son Benjamin Sanford the brother and Samuel Wittey
the executors to whom administration was granted having been first
sworn by Commission duly to administer.