You are here: Home>Topics>People>Other People>Harry William Peck and the History of Cedrics Garage

Harry William Peck and the History of Cedrics Garage

Growth from a small garage to a luxury coach hire business.

This is the early story of the Peck family who started the Cedrics Garage business in 1928.

Harry Peck was born on the 13th September 1883 to Smith Henry Peck and Emily Peck (nee Snelling) in Ipswich, Suffolk. Harry was one of 6 children.

In the 1891 census, Smith was described as a Corn Cutter or Hay Cutter. Quite an interesting description of his occupation, rather than an agricultural labourer, which was the general term used for someone who worked on a farm. (Ag Lab).

The family moved several times, from Ipswich to Sudbury, and then back to Ipswich. They were still living in Ipswich when Smith Henry died in 1910 at the age of 51.

By 1901 he had moved to Camberwell in London and was living with his cousin and wife, Ernest and Eveline Butler. He was working as a stationers porter for a wholesale and export stationers, Spalding and Hodge.

It was in Camberwell that Harry met his future wife Alice Babbs. They married in December 1904. Their first child Arthur Cedric, the future owner of Cedrics garage, was born in 1906. By 1911, Harry and Alice had two more children, Ronald Alfred and Olive Irene.

Harry’s wife Alice, died in 1913 at the age of 31 and Harry remarried in 1914 to Lillian P Webb. They had two sons, Ralph and Harry Oswald and a daughter, Gloria. 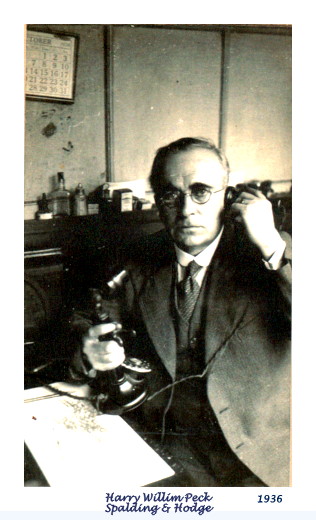 From 1901, Harry was working at Spalding and Hodge where he continued to work for 50 years. During that time he rose to the position of Warehouse Manager and variously had the positions of Paper Examiner, Transport Manager and Works Manager. He was highly regarded within the company.

In the firm’s House Magazine it was written of him:  ‘For many years the soul of the warehouse has been Mr Peck. Apart from his flair as an organiser, superintendent and diplomatist, Mr Peck is probably the handiest man in the West End’.  Quite a tribute.

Harry was an enterprising man in both business and personal interests. He taught himself to play the piano, organ and the flute. In business he seemed to be prepared to turn his hand to whatever interested him and make a success of it. He was a keen entomologist and ornithologist and won over 200 first prizes with his budgerigars in one season.

This was another of the businesses that Harry set up, the breeding of exotic birds. This business started out in London but was moved to Wivenhoe. It was very much a family affair. His two sons from his second marriage, Harry and Ralph were also involved in the business.

Harry also ran an antiques business and a garage in Brixton London. The antiques business was transferred to Wivenhoe when Harry moved to the area.  He bought a number of plots of land when the Wivenhoe Hall estate was put up for sale in 1927. 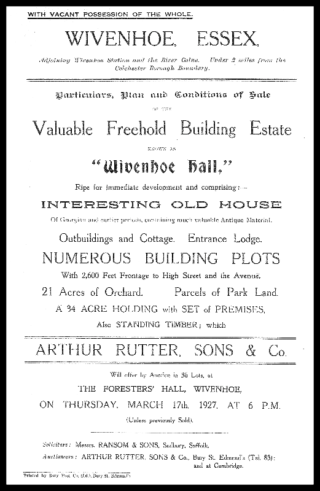 Harry lived in Oswald House which was built before the Second World War, to his specifications. There was a fair amount of land with the property, enough for Harry to keep ponies, another of his ventures. Without a doubt an imaginative man. The house is no longer there as the land was sold to Les Kemble and now has a number of houses built on it.

However Raymond Peck, Harry’s grandson, had a plot of the land on which he had a house built so there is still a Peck on the land.

In 1928,  Harry and his partner Jimmy Lynch financed the opening of a garage in Wivenhoe. This was run by Harry’s son Cedric, known as ‘Ceddy’, and the garage was called Cedrics. It was sited on land opposite the Co-op in The Avenue and the land had once been part of the Wivenhoe Hall estate.

The family lived in the upper part of the house and the lower floor was the Tudor Café. Harry also had a third garage in Sudbury.

The garage had 4 hand operated petrol pumps. At that time petrol was priced at eight pence a gallon. I wonder how much it cost to fill a car up with petrol? Probably a sight less than it would cost today!  But then again the average wage in the early 1930s for an agricultural labourer was approx. £2 a week, working 50 hours, and for a building labourer, it was approx. a little over £3 a week. 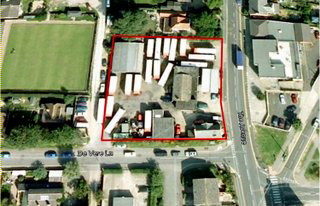 There were only 3 cars in Wivenhoe at that time, probably owned by the doctor and those with money to buy such a luxury.

With so few cars in the area it would have been good sense to expand the business.

Even the front of the garage was made to look eye catching by putting in flower beds and revolving lighthouses. There was also an Angus Sanderson car which was for hire on the forecourt.

There was a Rolls Royce which was commandeered by the army for use as an ambulance during the war.

After Cedric married Kathleen in 1930, he bought his first coach for £100 which was hired out at £5 a time. It was also used as a school bus when needed. Cedric built up a fleet of 14 coaches by the time he retired.

As the result of a crash, Cedric’s first coach was a write off. He then acquired a 14 seater Rio for £20. Over the years he built up his fleet of coaches, which ranged from 25 seaters to de luxe 57 seaters.

The deluxe coaches were for hire all year round for excursions all over the UK and to many parts of Europe. There were also seven secondhand coaches for hire to construction firms to carry their workforce to and from sites.

As the business expanded a new workshop was built to enable maintenance work to be carried out on site and under cover. 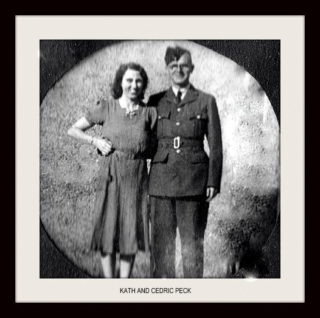 Cedrics wife Kathleen was very much involved in the business from the beginning, working alongside Cedric. During the 2nd World War Cedric served as ground crew with the Royal Air Force Bomber Command, having previously been a member of the Middlesex Yeomanry. During that time, Kathleen ran the garage single-handed while also raising a family. She continued to be involved even after the war.

It was not unusual during those war years to see tanks outside the garage being filled up with petrol as the tank regiment was stationed at Wivenhoe House and reputedly frightened off the fallow deer that were to be found there at that time.

During their leisure time they were members of the Wivenhoe Bowls Club and for a period of time Cedric was President of the Club. 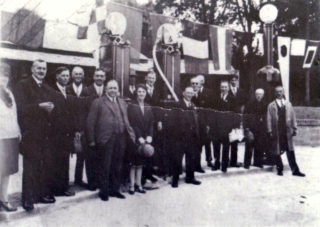 Cedric and Kathleen outside the garage.

End of an Era, a Celebration and a Sad Loss

Kathleen and Cedric continued to live in the flat above the Tudor tea rooms after they had retired.

The year before Kathleen died, she and Cedric, along with their family would have been able to enjoy a 50 year milestone, for this is how long they would have been running the garage in 1978. 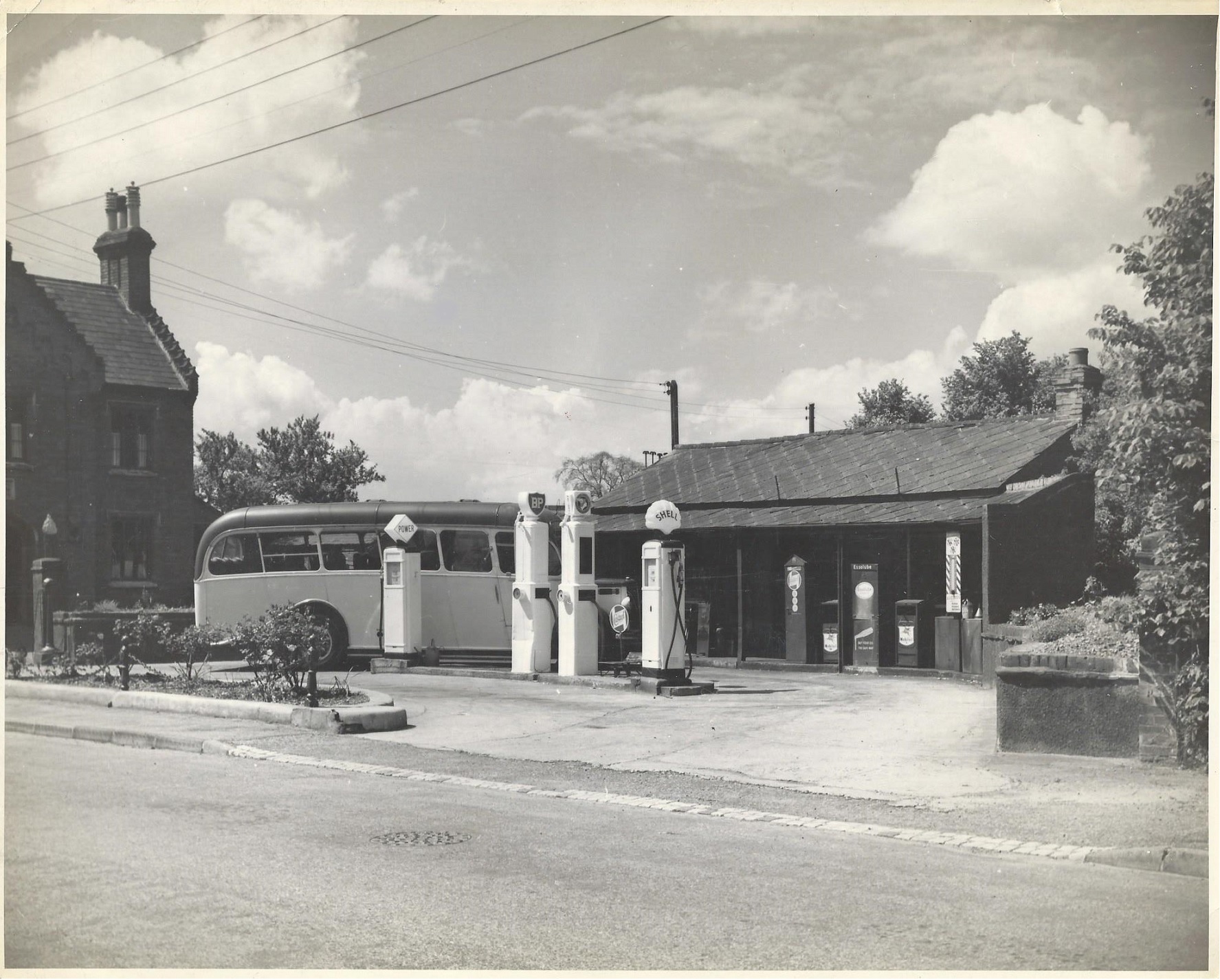 Cedric’s garage in its early days

For a larger image of this photograph, go this page – click here