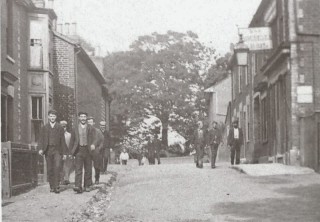 This was a Beerhouse, opened in the 1860s as the Old Shipwrights – the first landlord William Hindwood was a ship’s carpenter – and changing its name subsequently to the Anglesea Arms, perhaps to avoid confusion with the Shipwrights Arms.  This second name was, like Anglesea Road, taken from Henry William Paget (1768-1854), Marquis of Anglesey and commander of the British cavalry at the Battle of Waterloo, who had a yacht built by Philip Sainty in Wivenhoe.

The house may have been purposefully built for a pub, as it is larger than the other 1860s houses in Queens Road.  It became an Osborne’s, and thence a Colchester Brewing Co., pub.  It closed in 1922, the brewery receiving compensation of no less than £821 from the authorities.  The house was sold by auction for £250; it is now Nos 7 and 9 Queens Road, No 9 being known as ‘Anglesey Arms Cottage’.