Deed relating to the former ironmonger's shop at the corner of the High Street and Queens Road and also referring to the Greyhound Public House and Yard and former Malting. 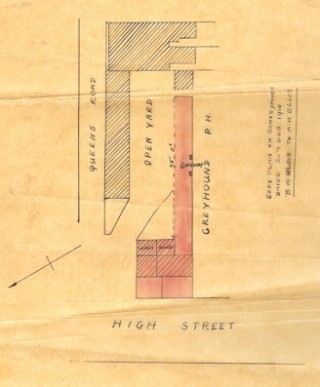 Plan on Conveyance of 20th December 1910
Plan on original deed

ABSTRACT OF THE TITLE OF MR ALBERT HAZELL ELLIS AND HIS MORTGAGEE TO FREEHOLD PROPERTY SITUATE IN HIGH STREET, WIVENHOE, ESSEX

THE SCHEDULE
ALL and singular the lands hereditaments and premises comprised in the following deeds or documents or any of them that was to say:-
Freehold shop Cottages High Street Wivenhoe Essex
Date of
Document
20.12.1910 Copy draft Conveyance B A Blois to A H Ellis
27.04 1917 Statutory Declaration by A H Ellis and S O Goodwin
EXECUTED by Mortgagor and attested

20th Dec 1910 Indenture of Conveyance of this date made between the said B A Blois of the one part and the said A H Ellis of the other part
DULY signed and witnessed.