The Ropeworks at Wivenhoe Cross

Established in the 1700s and demolished shortly after 1899 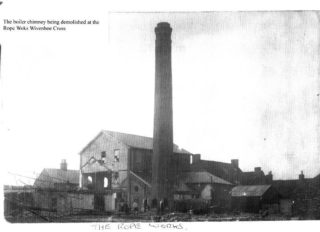 The Ropeworks chimney was demolished shortly after the Ropeworks business was sold in 1899
Photo: Wivenhoe Memories Collection 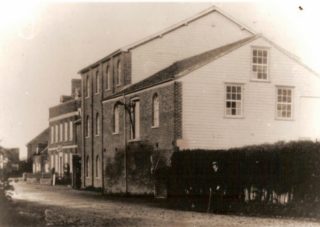 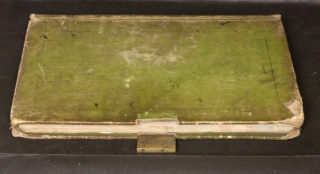 The Ropeworks would have been a familiar sight at The Cross until the business was sold in 1899 and the buildings, including the chimney, were demolished.

The business was established originally we believe by Michael Harrison in the early 1700s, then owned by Willliam Popps in the mid-1700s until purchased by Wiliam Browne in 1789. The business appears to have flourished because of the boat building activities on the river. However, when these yards stopped making sailing craft, and began to concentrate on building boats powered by engines, business slowed and the yard was put up for sale in 1899.

In 1762, William Popps promoted his business by means of an advertisement:

William Popps, twine spinner, of Wivenhoe in the County of Essex, have taken the rope walk which was the late Michael Harrison’s, in Wivenhoe Aforesaid, and intend to carry it on in all its branches;  where Gentlemen, may be supplied with all sorts of tarred ropes, rope yarn, spun yarn, white ropes of all sorts, white rope yarn of all sorts, twine, line, pack thread, shop thread, whip cord and small cords of all sorts….. all persons that please to favour me with their orders, may depend upon their being carefully executed, and all former favours gratefully acknowledged, by their most humble servant  William Popps.

Nicholas Butler in his book, The Story of Wivenhoe, described it thus:

‘At 10.30am, on Monday, 19th February, a steam boiler, a cylindrical affair made of plating two thirds of an inch thick, split into three pieces with a mighty bang which could be heard two or three miles away. The explosion shattered the engine room in which the boiler stood, strewing bricks and timber up to a distance of one hundred yards. None of the fifteen to twenty employees of the firm were injured, but three youths standing near the boiler were killed outright.  What exactly happened is not clear, but at the inquest it was more or less agreed that the water inside the boiler evaporated and in consequence the boiler became red hot, so that when some water reached it, probably from a steam pipe which was beginning to unfreeze, an explosive gas was produced. Another, unofficial, and quite unprovable version, which eventually found its way into print, alleges that the explosion was caused because a heavy weight was hung on the safety valve in order to increase the pressure inside the boiler.’

It was not until the 1900s, after the Ropeworks had been sold that The Avenue was established as we know it today. Until then, it had always been called Rope Walk.  A five-hundred yard long rope walk stretched from the works buildings to probably what would have been the boundary of land owned by Wivenhoe Hall, somewhere in the vicinity of where Harvey Road is today.

The ropes were spun by machinery which travelled up and down the Walk in an overhead gantry. It seems small boys would risk their lives by taking joy rides on the cables.  To prevent horses on Rope Walk from being frightened by the machinery when in use, Mr Browne put up screens to shield it from the public and from horses.

By order of Mr. Justice Byrne of The Chancery in London the business, Brownes Patent Rope Works Ltd, was sold.

Having been a place making ropes for nearly 200 years, it next became Barrell’s Saw mill and Timber yard.