About Jonathan Feedham and the Charity established in his name 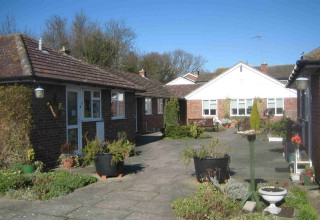 The courtyard at Jonathan Feedham Court, off Vanessa Drive

In the late 1600s, Jonathan Feedham lived on the Quay, in the house now called the Granary. He died in 1718, leaving no wife or family.

In his will, he left the ‘Minister and Churchwardens of the parish of Wivenho’ the sum of fifty pounds to be laid out in the purchase of some freehold or copy hold lands, the rents and profitts thereof may for ever hereafter be received and taken by the Churchwardens and by them yearly upon New Years Day be paid and distributed amongst poor saylors and saylors widdows belonging to the said parish of Wivenhoe at the discretion of the Churchwardens for the time being.’

In 1803, the fifty pounds was used to buy three acres of land from the Lord of the Manor near the Flag Public House. In 1863, rent from the land was six pounds a year which, a hundred years later, had risen to ten pounds a year.

This money was used to distribute as half-crown tickets for coal from Bowes, the coal merchant, or groceries from Jimmy Moore’s grocery stores. (Jimmy Moore also happened to be a Churchwarden at the time).

This land is now Feedhams Close

In 1971, the land was sold for housing, making £41,000, twice what the agent thought it would make. We now call this land FEEDHAM’S CLOSE.

At around this time, the Wivenhoe Urban District Council, as it then was, offered a plot of land next to Wyvern Court in Vanessa Drive, for a very reasonable price.

Jonatham Feedham Court and the Charity

In 1974, seven homes were built in the shape of a U, around a courtyard, and these we call JONATHAN FEEDHAM COURT.

The JONATHAN FEEDHAM CHARITY was established under a Trust Deed dated 17 May 1974 to administer these bungalows as almshouses for the benefit of ‘persons of good character who are resident in the area of the Ancient Parish of Wivenhoe’. Under the terms of this Deed, the five trustees, which includes the Rector of the Parish, must give priority to applicants who are or have been sailors, or are the widows of sailors.

In 1991, the Charity Commissioners allowed the Trustees to increase the amount of money spent on relief of poverty or distress from £50 to £1,000 out of income earned on investments. Over these last several years, the Trustees have quietly and discreetly helped a number of people with a financial difficulty.

So, Jonathan Feedham’s gift of fifty pounds in 1718 now provides homes for seven people as well as providing charitable grants of various sums around the Parish of Wivenhoe each year.

NOTE:  These almshouses are now managed by the Wivenhoe Housing Trust, along with the almshouses in Rebow Road following a merger of the two charities in 2002.  There are now nine trustees and is registered charity no. 1157022.  The Jonathan Feedham Charity still exists as a ‘Relief in Need’ fund managed by the trustees who are always keen to hear of a Wivenhoe resident with a financial difficulty or an organisation in need of a grant that would directly benefit one or more residents of Wivenhoe.  Please contact Peter Hill, Chairman of Wivenhoe Housing Trust or any one of the other trustees:  Rob Neve, Cllr Robert Needham, Cllr Kevin Read, Gill Sleightholm, Colin Andrews, Colin Kelly and Ron Titchener. Or write to Michael Siggs, Clerk to the Wivenhoe Housing Trust, PO Box 993, Colchester, Essex CO3 3TQ.