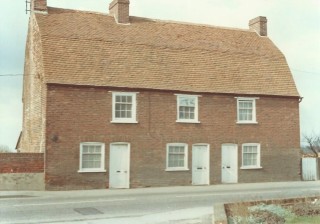 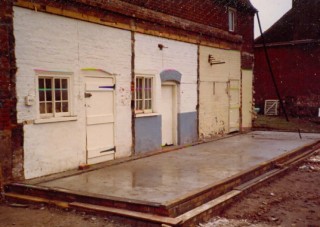 The back of the 'Workhouse' probably unchanged from when it was built around 1630. 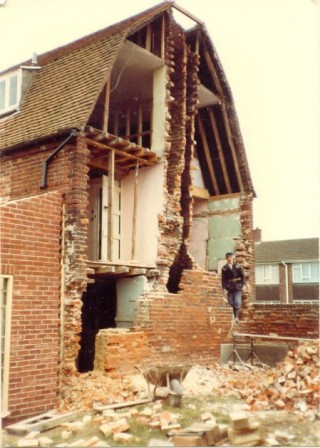 The 'Workhouse' without its gable end wall in 1983
Peter Hill 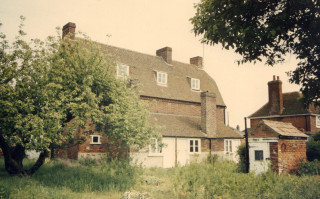 The rear of the 'old workhouse' as it looked immediately before its renovation in 1983. The 'privy' is no longer there!
Photo by Peter Hill 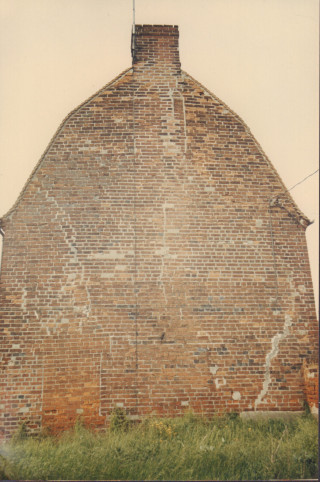 The gable end wall of the 'old workhouse' before it was rebuilt in 1983. The major cracks in the wall were reputedly caused by the earthquake in 1884. You can also see the line of bricks indicating the line of the original roof before it was extended upwards.
Photo by Peter Hill

We bought our home in 1983 not because of its history but because we saw the potential to create a nice home in a building which had become very dilapidated and needed a huge amount of work doing to it.  In consequence of buying it, we lived in a caravan in the back garden for almost a year.

This is the story, not of our renovation project, but of the period our home was the Workhouse for Wivenhoe.

It has been suggested that the building started as a small farmstead with a ground floor and an upstairs living area. Cattle may have lived downstairs in the colder winter months, providing their body heat for the benefit of people living upstairs.  We don’t know how true this is. It is likely though that the building has been part of the Rebow estate since it was built around 1630.  At that time, the building would not have looked as it does now. It probably started with a thatched roof and the windows would have looked very different in the front; there was probably only one chimney and certainly not three front doors. They were added after 1836.

Caring for the Poor

in 1563, the first Poor Law was passed. It was the responsibility of the Church, through what was called the Vestry, to manage the administrative affairs of the Parish. This included looking after the poor and raising taxes on those who were deemed wealthy enough to be able to afford to contribute and it seems you didn’t have to be very wealthy to contribute.

The Churchwardens had the principal responsibility of maintaining not only the fabric of the Church, but also to worry about the behaviour of people. Drunkenness and lewd behaviour could attract fines, or worse. You could even be fined a shilling for not going to Church. The Churchwardens employed Constables to maintain law and order.

Became the Workhouse in 1726

On 13th April 1726, a deed of grant was secured on a cottage between Wivenhoe Heath and Wivenhoe Cross. This was the building which was to eventually become our home.  Initially it would have accommodated up to 15 people but it soon needed to be enlarged.

Instead of finding a larger building in which to house more poor people, or ‘paupers’ as they were often called, the Vestry eventually chose to extend the original cottage by adding a second storey, which included the mansard roof with clay peg tiles seen today.  This meant the Workhouse could now house up to 30 men and women ‘inmates’ on separate floors.

The Workhouse Master lived next door (click here see a picture of the Workhouse Master’s house) and in 1765 received 1/6d per head weekly plus the proceeds of the inmates labour. In the case of women, they were expected to weave wool.

By 26th January 1799, the Workhouse Master was receiving a little more.  At a Vestry meeting, it was decided that John Hardy and his wife should superintend the poor in the Workhouse upon the following conditions:

Note: This information was researched by Olive Whaley

By 1807, the cost of looking after the poor had risen as the Workhouse Master was paid 3/- per week for food and clothing for each person.

Responsibility for housing the Poor transferred to Colchester in 1836

In 1834, the Poor Law was amended as the cost of looking after poor had risen across the country and the Union Workhouses were introduced. The Lexden and Winstree Union Workhouse was built in 1835 on the old London Road in Stanway and it took over the role of housing the poor from the 35 Parishes many of which having had workhouses of their own.  It was opened on 1st February 1836.   This Union Workhouse was run by a Board of 38 Guardians, with one from each Parish but two from each of Dedham, Wivenhoe and Brightlingsea as they were the larger communities at that time. The Wivenhoe Workhouse survived for a bit longer whilst the Union Workhouse was being completed. It was built to house 330 inmates.

What happened to the Wivenhoe Workhouse

When it was no longer needed as a Workhouse, it reverted once more to becoming a property of the Rebow estate.  It was at this stage in its history, 1836, that the building was converted to three cottages, with internal walls added, new chimneys built including one in the middle of the house and three front doors inserted in the front of the property.

The gable end wall was badly damaged it seems in the 1884 earthquake and we had it rebuilt using especially made bricks commissioned from the Bulmer Brick and Tile Company, near Sudbury.  The sculleries at the rear were in such poor condition, it was necessary to rebuild them altogether. See the pictures of the cottages when we bought them and of the gable end wall.

A substantial amount of internal work was necessary to make it a very special home. An extension was added in 1991 which gave us a large dining room that is more like a board room for the many meetings which have been held here since it was added.