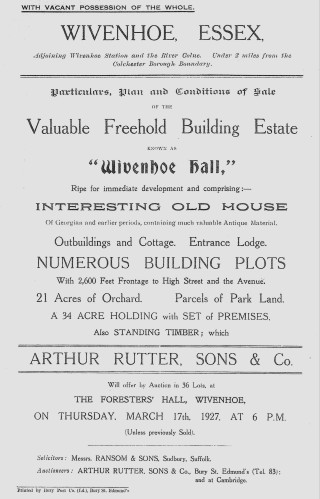 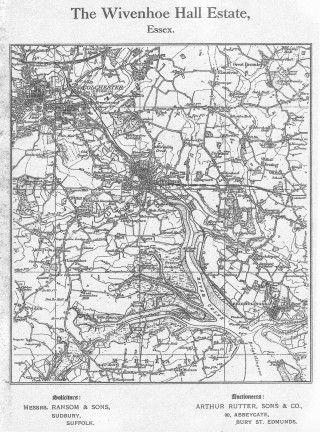 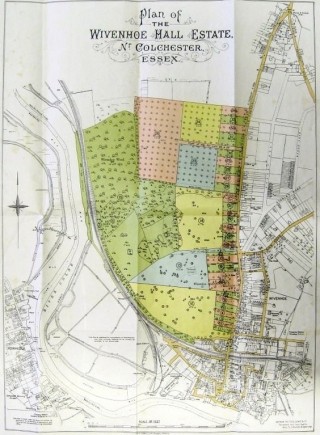 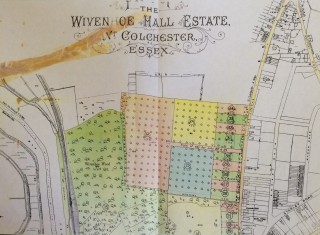 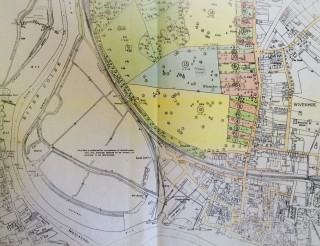 Wivenhoe Hall was the Seat of the Manor of Wivenhoe which had first been mentioned in the Domesday Book in 1066. Over the centuries, the manor descended through several notable families: the de Battaille’s; the Suttons; the de Vere’s, Earls of Oxford; and the Townshend’s, until, in 1657 Horatio Townsend sold the manor to Nicholas Corsellis, descendant of Zegar Corsellis from Flanders, a London merchant and elder of the Dutch church.

The Manor House itself had been reincarnated more than once and had been rebuilt just north-west of the church in the sixteenth century (circa 1530) when it became known as Wivenhoe Hall.

It remained in the Corsellis family for several generations (the Corsellis family memorial can be seen in the old Wivenhoe Cemetery) and it was re-built again in 1844. However in due course financial difficulties began to beset the family and this led to parcels of manorial land being sold off to pay for debts (or ‘incumbrances ‘ as they were frequently called), from the late eighteenth century onwards.

By the late nineteenth century, the contemporary Lord of the Manor, Nicholas Caesar Corsellis Lawton (The Younger) was no longer living at the Hall, but with his mother at Ballast Quay House. The Hall had been occupied by a successive number of tenants and was falling into a state of disrepair.

In the Spring of 1899 the manorial estate began to be completely dismantled and on 16 March, Nicholas Caesar Corsellis Lawton sold 1,257 acres to Ernest Stanley Beard, a Colchester estate agent and auctioneer. This mainly comprised land to the East of the Avenue above what is now Belle Vue Road but also including land in Elmstead, Alresford and property around the Quay and the Cross. Details of this sale can be seen  here.  [The estate agent’s name lives on today in the streets named Ernest Road and Stanley Road.]

At this time Wivenhoe Hall itself was occupied by Alexander Kay Barlow (the first and longest-serving Chairman of Wivenhoe Urban District Council) who had taken over the tenancy for £84 a year in 1896. He expressed an interest in purchasing the Hall Estate and on the same date as the previous sale, on 16 March 1899, Nicholas Caesar Corsellis Lawton sold the Hall itself and other property to Alexander Kay Barlow for the sum of £3,500 and this deed is cited in the Auction Pack ‘Stipulations’ for the final disposal of the Hall on 17th March 1927.

The Conveyance indicated that the Purchasers (described as joint tenants) might sell the same with the power at discretion to postpone the sale and to stand possessed of the net profits (after paying relevant commitments) and this should be held in trust for the Purchasers in equal shares as tenants in common. Their names are cited in the ‘Memorandum’ listed below.

Two months later the Auction of the “Wivenhoe Hall” Estate took place at The Foresters’ Hall in Wivenhoe on Thursday 17th March 1927 at 6pm. The property was described as Valuable Freehold Building Estate ripe for immediate development and comprising:-

The 36 plots are indicated on the accompanying plan prepared from the 1923 Edition of the Ordnance Survey Map [See Image 3].

The papers and specifications outlined in the auction pack; a summary of the 36 Lots; and their more detailed Particulars can be viewed in the downloads below.

[Note: these are not copies of the original material but are transcriptions made by Pat Marsden in August 2016]