Advert in the Essex Standard, May 1858 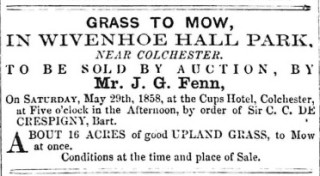 Grass to Mow at Wivenhoe Hall Park, 29 May 1858
Essex Standard

Sir Claude de Crespigny, Bart. in whose name the advert was placed, moved as a tenant into Wivenhoe Hall in 1858. According to Nicholas Butler in ‘The Story of Wivenhoe’ (p.90), he was ‘a genial, gregarious, extrovert Old Wykehamist with a talent for knockabout comedy and a family of four sons and seven daughters. He devoted much of his time to the volunteer moment, becoming initially a captain and later a lieutenant-colonel of the 6th Essex (Colchester) Corps.’