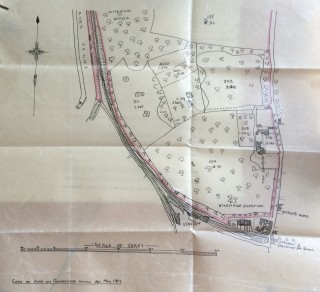 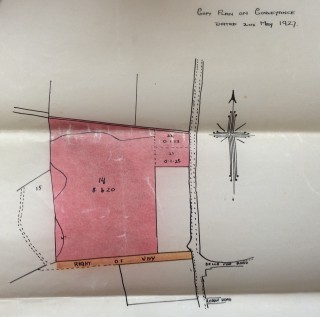 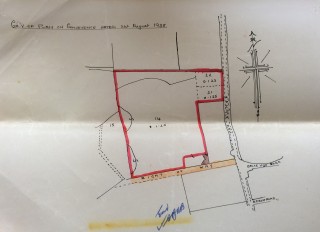 Abstract of Title of Dr. Walter Radcliffe to land part of “Ten Acres” in Wivenhoe, Essex, 1951

This Abstract, dated 1951, was found in deeds relating to ‘Nutwood’ on De Vere Lane, which was once part of the “Ten Acres” parcel of land identified as Parcel 202 on the 1897 Ordnance Survey Map (2nd edition). “Ten Acres” itself was originally part of the Wivenhoe Hall Estate. The Abstract itemises all the conveyances of property from 1899 – 1951.

By the late nineteenth century, the Lord of the Manor, Nicholas Caesar Corsellis Lawton (The Younger) was no longer living at the Hall, but with his mother at Ballast Quay House. The Hall therefore was occupied by a successive number of tenants and was falling into a state of disrepair. In the Spring of 1899 the manorial estate began to be dismantled and on 16 March, the Lord of the Manor, sold 1,257 acres to Ernest Stanley Beard, a Colchester estate agent and auctioneer. This mainly comprised land to the East of the Avenue above what is now Belle Vue Road.

At the time Wivenhoe Hall itself was occupied by Alexander Kay Barlow (the first and longest-serving Chairman of Wivenhoe Urban District Council)  who had taken over the tenancy for £84 a year in 1896. On the same date as the previous sale, on 16 March 1899, Nicholas Caesar Corsellis Lawton sold the Hall itself and other property to Alexander Kay Barlow, who a day later entered into a mortgage agreement to secure the sum of £3,550.

On this date the property was sold again as part of a more significant purchase of 96 acres by Mary Ellen Morgan. As the Purchaser she paid £8,000 (£3,550 to the Mortgagees and £4,450 to Vendor). This property, which would become later known as the Wivenhoe Hall Estate, comprised many freehold properties in the lower town and further parcels of land to the West of the High Street and Avenue and it was described as:

ALL AND SINGULAR the lands hereditaments and premises situate in the parish of Wivenhoe aforesaid and containing in the whole 96.134 acres or thereabouts the boundaries abuttals and lateral dimensions whereof are more particularly delineated and described in plan drawn thereon and edged with pink and the particulars whereof were comprised in the Schedule thereto the numbers in such Schedule referring to the numbers in the Map of the Ordnance Survey 1897 (2nd Edn)

In a further Indenture dated 2 June 1919 Mary Morgan (as the Mortgagor) appears to release property back to Alexander Barlow (the Mortgagee) free from incumbrances on payment of £5,000. [Nicholas Butler in The Story of Wivenhoe, p218 refers to Mr. and Mrs. Roland Morgan as ‘the new tenants at the Hall’]

On 3rd January 1927 Alexander Barlow (now again referred to as the Vendor) conveys the property to George Charles Gooday of Sudbury, Suffolk, Gentleman, Bertram Purr of Sudbury, Motor Engineer, and John Adams of Sudbury, Nurseryman (thereinafter called the Purchasers) for £4,600.

On this date the above named purchasers sell the particular parcel of land later referred to as “Ten Acres” to Stacey Wood, Grocer, therein described as of Wivenhoe in the County of Essex.

Stacey Wood therein described as of Ten Acres The Avenue Wivenhoe Essex Grocer sells the property to Hugh Wake Pawsey of Ballast Quay Wivenhoe at a price of £1,850. It is described as:

Which said pieces or parcels of land thereinbefore described were more particularly delineated and described in the plan drawn thereon and thereon edged with pink Together with a right of way for the Purchaser and his successors in title for all purposes over the 40 feet strip of land coloured yellow on said plan and over the strip of land coloured brown on the said plan.

Following the death of Hugh Wake Pawsey on 13 November 1943 his heir Owen Stewart Pawsey of The Limes, the Avenue, Wivenhoe, the freehold premises situate and known as “Tenacres” (sic), Wivenhoe were conveyed to Walter Radcliffe of 7 High Street, Wivenhoe, at the price of £5,500. Dr Radcliffe was the local doctor and also a keen yachtsman, who produced the ‘Wivenhoe One’ dinghy with Lewis Worsp.

The complete abstract can be  viewed here. [Some supplementary details have been added from Nicholas Butler’s ‘The Story of Wivenhoe’].