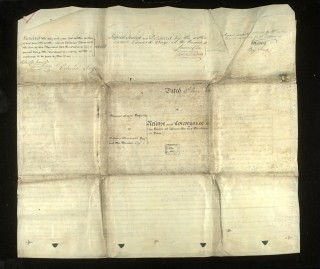 Who Was Edward Sage?

Following the death of Daniel Harvey in 1794 his estate was acquired by Edward Sage, an Irish Linen factor based at 19/20 Cheapside. Much of what is known about him can be ascertained from his will of 11 March 1817 (National Archives PRO 11/1590). He married his wife, Sarah (1756-?) in 1771. She was the daughter of Christopher Rawdon (1723-1799), esquire of York, a shalloon maker and merchant of Halifax and his wife, Abigail. This may have been a marriage of convenience as in his will he refers to Sarah’s brother, William (1763/4-1805) as his brother in law and business partner. At the time when he began purchasing the numerous parcels of Wivenhoe property in 1795 he was a partner in a company listed as Sage, Rawdon & Atkinson, Wholesale Linen-Draper at 19 Cheapside in the City of London, later to be known as Messrs Sage, Rawdon and Jennings. The business appears to have been kept as a tight-knit family concern as one of Edward Sage’s daughters married the son of William Rawdon, a second married Richard Jennings, and a third married Langston, his warehouse keeper.

Essex Record Office holds the collection of deeds relating to the Wivenhoe House Estate and the first of these (ERO D/DU 225/7) recites an Indenture made on 4 July 1811 between Edward Sage of Wivenhoe and his wife, Sarah, William Brummell of Hadleigh in the County of Suffolk, and Jonathan Rashleigh of Hatton Green in Middlesex (a trustee named by and on the part of William Brummell).

In this deed reference is made to all the Wivenhoe property acquired by Edward Sage over a period of ten years. Firstly he acquired: 1) the Messuage or Mansion House coach house stable and other erections and buildings and the gardens paddock plantations and the several closes or fields or meadow of pasture land from the trustees and surviving family of Daniel Harvey, as referred to above, on 1 and 2 April 1795; 2) the messuage and appurtenances once called Rogers but now called the Baytree and three closes of land containing seven acres situated in Wivenhoe next to a place called The Cross on the surrender of Elizabeth Bartwell on 31 August; 3) the property referred to as ‘the underset to the Baytree’ to hold for ever on the surrender of Samuel Clarke at the manorial court on 19 April 1797; 4) an Indenture of Enfranchisement by which Nicolas Corsellis releases all the properties held by him free and discharged of all rents, copyhold payments etc. (apart from the pursuing of game as therein mentioned); 5) a certain messuage or tenement with the outhouses, yards, gardens, orchards, hereditaments with the Malting Office thereupon erected and other appurtenances therein belonging formerly known as Cross Keys, plus other messuages or tenements known as Burrs and Harsoms, with the brew house, outhouses, edifices, and buildings; 6) the pightle or parcel of land at The Cross on the surrender of Francis and Mary Rudge on 8 April 1801 (enfranchised on 1 May 1801); the orchard piece or parcel of land originally belonging to two copyhold messuages or tenements called by the name of Pupletts with the appurtenances on 28 September 1805 (he later purchased the freehold from Nicholas Corsellis); 7) a piece or parcel of land or pasture ground called the Park belonging to the Cockaynes or Elmstead Lodge farm with the appurtenances on 1 May 1801; 8) a piece of land or meadow belonging to the living or advowson of St Mary’s Church aforesaid called the Anchor Meadow on 29 October; 9) the piece or parcel of land part of a tenement anciently called the Rose on 27 February 1802. Some of these parcels of land can be identified from the sketch maps attached to the 1771 Act of Parliament which enabled Daniel Harvey to purchase the nucleus of the Wivenhoe Estate from Nicholas Corsellis; several of them can also be identified on the 1799 Survey Map of Wivenhoe and some of them e.g. the Malting Office and the brew house may be the same that were described on the 1734 Hayward Rush Map of Wivenhoe

The Disposal of the Estate

Sage must have been quite wealthy in order to purchase these various parcels of land; possibly he bought the property mainly as an investment, but he did not retain them for very long. By 1811 the property which formed the core of the Wivenhoe House Estate had been sold to William Brummell and by 1815 Sage was renting the Minories, on East Hill in Colchester, the family property of Isaac Boggis, the descendant of the well-known bay-maker, who ran a cloth-making business from the house.

Following this his health must have deteriorated since the probate copy of his will dated 11 March 1817 states that he is ‘labouring under much bodily infirmity’. His business is still viable as he states that he wishes that the sum of twenty thousand pounds he has employed in the Irish linen business shall be carried on jointly by Richard Jennings with his wife Sarah Sage, with an annuity of nine thousand pounds to his wife for the term of her natural life. The rest of his estate is divided between his children, John, Harriet, Alicia (who married James Barker), Matilda (married to James, the son of William Rawdon), and Elizabeth and two other children that it has ‘fallen to my lot to take care of’.

He also leaves money to his daughter Emma’s husband, Thomas Langston of Watling Street in London, Warehouseman; his daughter, Mary Anne’s husband, Philip Havens of Donyland Hall; and Alicia Rawdon, the sister of his late partner and brother in law, William Rawdon. He states that if the business partnership is later dissolved he bequeaths to his son in law Philip Havens and his wife a number of leasehold properties situated at 20 Cheapside and in Fountain Court, in Cheapside and if his wife dies he bequeaths his leasehold estates in Aldersgate Street in Nicholas Square and Cheapside to his son, John. Like many of his contemporaries he had also acquired a house in Colchester in the parish of St Mary on the Walls, where he was living at the time of drawing up his will and he leaves this to his son, John, and his wife for the term of her natural life.