Describes an early sale of the parcel of land on which the ten houses comprising Colne Terrace had been built by Charles Heath, and subsequent conveyances. 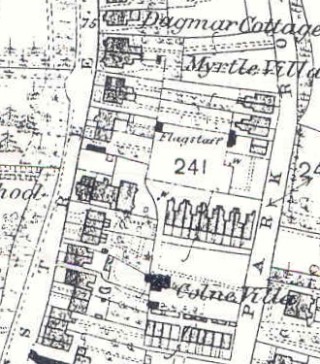 Shows Colne Terrace due south of Plot 241. The National School can be seen on the parcel of land to the west.
1876 Ordnance Survey 'First Edition': Wivenhoe, Elmstead, & Ardleigh Parishes (1:2500, twenty-five inches to one Mile)

Also refers to land facing Park Road to the east having a frontage of 100 feet and depth of 132 feet, bordered on the north by other hereditaments formerly belonging to Jessie Florence Duncan as described in the Indenture.

07.09.1871 Mortgage between Charles Heath then of Wivenhoe (oyster merchant) (1) Will attested 15.11.1880. He appointed his wife Amelia Heath, his son Charles John Heath and his friend James Moore Executrix and Executors.
Refers to the parcel of land having a front on Park Road of 80 feet and depth varying from 135 feet on the south side and 167 feet on the north boundary and land recently sold and conveyed to James Charles Bates on the west in part by him then formerly belonging to B Sainty and in other part the boys public elementary school on the north by hereditaments lately the property of William Madder and on the east by Park Road. The same formed the northern-most portion of a larger piece of land having a frontage of 150ft to Park Road aforesaid which was conveyed to the said Charles Heath on 29.09.1864.

22.02.1907 Mortgage between the Duncans and Colchester Permanent Building Society