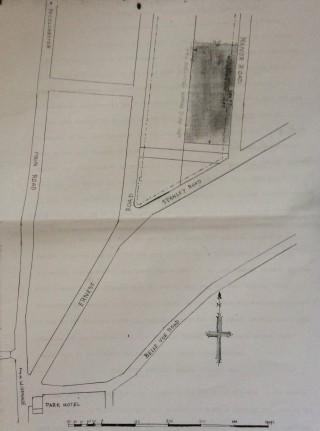 IN WITNESS whereof the said Ernest Stanley Beard hath hereunto set his hand and seal and the said Company have hereunto caused their Common Seal to be affixed the day and year first before written.

THE FIRST SCHEDULE above referred to

ALL THAT piece of freehold ground situate in the Parish of Wivenhoe in the County of Essex having a frontage of 320 feet to Manor Road and a depth of 140 feet As the same was late part of the “Vine Farm” and is more particularly delineated and described in the map or plan drawn on these presents and thereon coloured pink [shown as dark grey on this copy].

THE SECOND SCHEDULE above referred to

1. The said Company shall within one month from the completion of this purchase make and for ever after maintain fences on the sides of the said premises marked T.

2. The building line shown on the plan shall be observed and no erection or building is to be erected or built between the said building line and the road in front of the said premises except bay windows porticoes and fences.

3. No building on the said premises shall be erected or used as a public house beershop or licensed house or fried fish shop.

4. The said premises shall not be let or sold for the use of gypsy caravans tents or camps under a penalty of £50 for each offence such penalty to be paid to the Vendor.

SIGNED SEALED AND DELIVERED by the before named Ernest Stanley Beard

in the presence of:-

The Common Seal of Forresst & Son Limited was hereunto affixed in the presence of:-