Now part of the University of Essex 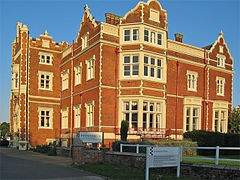 Wivenhoe House, now part of the University of Essex 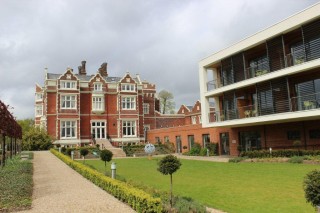 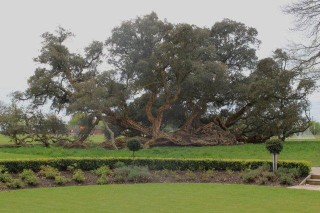 The Cork Oak at Wivenhoe Park probably planted over 100 years ago.
Photo by Tony Forsgate

This was the same General Rebow who returned from the Peninsular Wars with two cork oak cuttings in his boots. Today, those two oak trees stand tall and proud within the grounds.

When General Rebow died in 1845 the estate passed to his son-in-law, future English Liberal Party MP John Gurdon Rebow. He commissioned the architect Thomas Hopper to remodel the House in 1846, and William Andrews Nesfield to advise on the relocation of the coach roads and entrances and to advise on the planting of the park and the flower garden.[4]

John Gurdon Rebow died in 1870 and passed the estate to his son Hector Gurdon Rebow, during whose ownership Wivenhoe House survived England’s worst-ever earthquake in 1884. The estate was sold to Charles Edmund Gooch in 1902, and whilst within this family the house was requisitioned by the War Department during the two major conflicts of the 20th century. In World War II, the tank regiments stationed here scared off the fallow deer. The house once also served as the headquarters of the SAS.