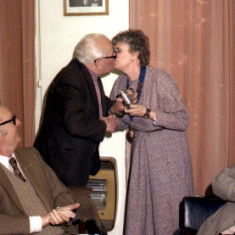 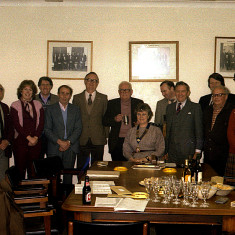 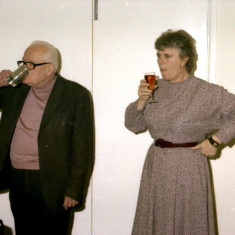 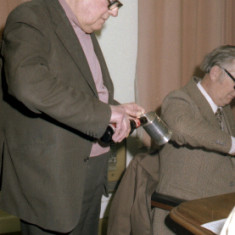 Cllr Bill Sparrow filling the mug he was presented with by his fellow Councillors for the first time. 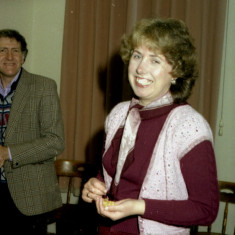 When Bill Sparrow decided to retire from the Town Council in April 1983, it almost felt the end of an era. Bill was well-known in Wivenhoe. He had run the building firm AE Sparrow & Son and he also ran the Rose and Crown public house on Wivenhoe Quay for many years.

Town Mayor Mrs Val Last who had worked with Bill Sparrow as members of the Wivenhoe Urban District Council marked Cllr Bill’s retirement with a tankard which was presented to him at the end of his last meeting in April 1983.

Cllr Bill Sparrow was not the only person to leave the Council at this time; Cllr Mike Roots, Cllr Stan Croucher and Cllr Derek Wilkinson all decided to step down and not seek re-election.

Also at this time Peter Lang who had served the Council as its Clerk for several years retired and John Potts was recruited as Town Clerk in his stead.