You are here: Home>Topics>Events>Civic Events>Cllr Tom Roberts gives away record sum from the Mayor's Charity Fund in 2006

With the assistance of Mayoress Dilly Meyer and others, £7,600 was raised 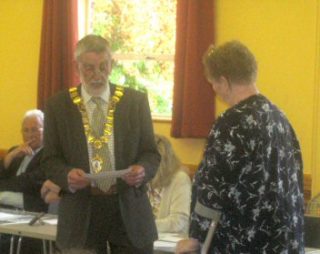 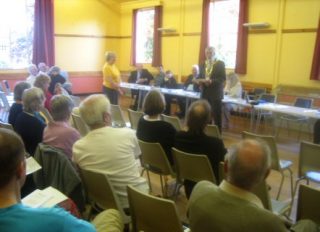 Town Mayor, Cllr Tom Roberts about to present Enid Heslop with a cheque to FOSM to help with the production of Wivenhoe News
Peter Hill 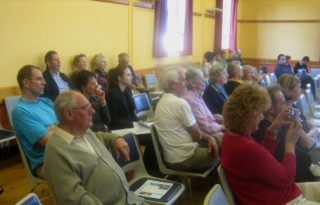 People gathered for the presentation of cheques and the Annual Town Meeting that following at which the Annual Report and Accounts of the Town Council were presented.
Peter Hill

Prior to the Town Council holding its Annual Town Meeting in the William Loveless Hall on Wednesday, 10th May, Town Mayor, Cllr Tom Roberts presented cheques to many organisations from the Mayor’s Charity Fund.

St Mary’s Church – in recognition of generous help and use of the church, particularly for the Civic Service:     £100

Royal British Legion (Wivenhoe Branch) – towards refurbishment of its Hall:   £200

Wivenhoe May Fair Committee – in recognition of the fact that additional expenses this year to comply with new licensing legislation will curtail the Fair’s usual support of charities:  £100

Isabel Evans – Isabel has made a huge contribution to our community, particularly through her work with the Wivenhoe Youth Theatre, and is currently struggling to put herself through drama school without the benefit of a grant or student loan:  £200

and during the year, Tom and Dilly gave out: