A plan outlining how local residents wanted their town to develop 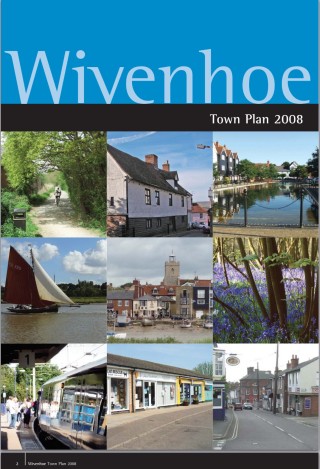 Since 2001 the government had been encouraging communities to draw up a plan for how they wanted their town or village to develop. Wivenhoe Town Council supported a team of resident volunteers to carry out this project. The aim was for Wivenhoe’s plan to be adopted by the local planning authority as Adopted Guidance, and for various agencies named in the action plan to work to deliver solutions to the issues identified.

In early 2006 a preliminary public meeting was held in conjunction with the Rural Community Council for Essex to explain to residents how to create a town plan. This workshop session asked residents to comment on ‘What’s good about Wivenhoe?’, ‘What’s not good about Wivenhoe?’ and ‘How could Wivenhoe be better?’ under various subject headings including transport, health, environment and so on.

Following this, a group of volunteers met to draw up questionnaires based on the issues raised at the workshop. These were distributed throughout Wivenhoe in the form of a general questionnaire, a business and working from home questionnaire, and a youth questionnaire (for those aged 8-15). There was a high level of concern about the lack of youth provision in Wivenhoe expressed at the initial workshop. However only two under-18s had actually been present, and it was therefore felt necessary to undertake additional outreach work before devising the youth questionnaire.

Two copies of the general questionnaire and one copy of the youth survey were distributed to all households in spring 2007. For the purposes of the survey Wivenhoe was divided into the areas shown on the map (see inside cover of Town Plan). A quarter of the household questionnaires were returned (1,624 out of 6,500 distributed), which was higher than expected for a survey of this type. Data from the household questionnaires was coded by Warwick Software, and analysed by the project team. 79 youth surveys were returned (around 10% of the target age group). Responses to the business and working from home survey were so few that they are not reported back in this plan.

Information from the 2001 census was used to ensure the data from the general questionnaire was representative of the population and from across all areas of the town. There was an excellent spread of responses from all areas of Wivenhoe, and equal proportions of men and women had responded. However, older people were rather more likely, and those in their twenties much less likely to reply than other people. A set of statistical ‘weights’ was used to balance this out so that the figures in the report reflected the opinions of the population of Wivenhoe, and did not over-represent the opinions of older residents. The volunteer group were therefore confident that the report represented the broad views of the population of the town.

Edited from the Introduction to the Wivenhoe Town Plan which was published in 2008 and can be viewed In full below. The Plan was adopted in October 2008.