You are here: Home>Topics>Maps, Books, Deeds, Wills & more>Books about Wivenhoe>Wivenhoe and Neighbourhood from the Earliest Times

Wivenhoe and Neighbourhood from the Earliest Times 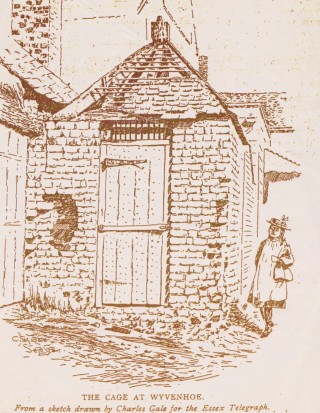 The Cage at Wivenhoe from the Essex Telegraph
Wivenhoe Memories Collection

A photocopy of an account drawing on classical references (Tacitus) and available records and registers from the Doomsday Book onwards. It assumes that because of its proximity to Colchester, Wivenhoe must have always been a port for exports (such as cattle, oysters, corn, hides, hunting dogs, wool, fish and slaves) from Roman times. It refers to Boadicea (Boudicca) and the sack of Colchester, then moves forward to Saxon times and ranges freely through the following centuries.

There was no evidence of Wivenhoe as a ‘parish’ until the seventh century and there are no records of an early church but there may have been one built of wood, wattle or stone. Wivenhoe is first mentioned in the Domesday Book in 1086. There are brief histories of the Lords of the Manor and Rectors, are recorded from 1366-1395. He refers to John De Vere, Lord of the Manor in 1424 and suggests that the 15th century was a ‘glorious’ time for noble families with power and wealth. There was a revival of shipbuilding but prior to this fishing had been the main industry in the town and he says that Wivenhoe fishermen bought in ‘the best soles in the kingdom’. Smuggling was rife and he has himself seen secret passages, double chimneys, vaults, etc. He believes that Wivenhovians did not have the ‘heavy, slow, suspicious nature of the typical East Saxon but were open, courageous, nimble, bright and gifted with a strong sense of humour’, indicating that there might be a strong Danish, Norman or Dutch influence in the population. The church was supported liberally by noble and illustrious families (De Vere, Beaumont) who occupied the Manor House. He mentions Beau Brummell’s brother who had a house in Wivenhoe and is buried in Wivenhoe churchyard and mentions the ‘quaint’ entries in the burial registers.

There was a great impetus to shipbuilding in the sixteenth century and he speaks of the influence of Francis Drake. He remarks on the pargetting of the ‘ancient times Revenue Office’ and former detention house in the seventeenth century.

In the eighteenth century he refers to Daniel Harvey, the Commander of the Wyvenhoe (sic) Customs cutter, who died 1793 [1794] and was interred in the church; he suggests his portrait is in the National Portrait Gallery [but in fact this is a different Harvey]. He then moves on to speak of Anchor Hill, where the parish cage and whipping post were kept (the cage existed until 1898); it seems that drunks who were placed in the cage usually came out as drunk as they went in as their chums plied them with drink. He describes the notables of Wivenhoe and their gifts to the church and the complex civic duties of the church wardens.  By 1922 the chief industry was ship-building and repairing and a fair was held annually in the town on 4 September.

[The account also includes a map of Wivenhoe of 1733].