Wivenhoe A Hundred Years Ago 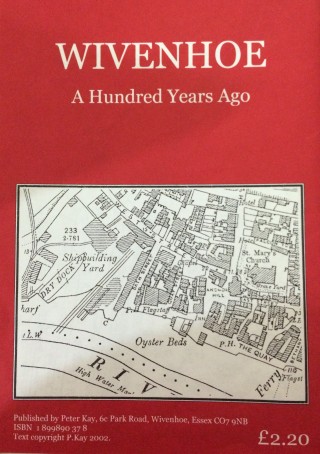 A large fold-out copy of the Second Edition of the Ordinance Survey map, surveyed in 1896 and published in 1897 (25 inches to the mile) with some additional historical notes about the physical growth of the town from the 1850s to the date of publication of the map. Cites 1859 – 1868 as a period of major development of the town and considerable increase in the population from 1,838 in the 1861 census to 2,124 in 1871. This was partly to do with the advent of the railway but also the building of a number of mainly small terraced cottages for the workforce of the increasingly successful shipyards. At this time developments included Alma St, houses on the north side of Anglesea Rd, Paget Rd, The Gas Works, Park Rd (including Denton’s Terrace and Colne Terrace) Queen’s Rd, these latter all laid out on what had been the grounds of Wivenhoe House, a large house on the site of the later Rebow Road Almshouses, which was put up for sale for redevelopment and bought by Thomas Harvey, the leading shipbuilder of the day (and now property developer). The east side of the High St was extended and Station Rd laid out in 1863.  The town also acquired 3 new pubs, the Railway Hotel (now the Station Hotel), the Park Hotel, and the Grosvenor Hotel. Later developments included the almshouses on Rebow Rd, and the new Board School of 1891. The Avenue and Belle Vue Rd (formerly Rectory Road’ still passed through open fields in 1896 but in 1897 the land alongside Belle Vue Road was sold off as building plots. Ernest Rd, Stanley Rd, and Manor Rd were built in late 1800s and early 1900s. This development meant that the hamlet of Wivenhoe Cross, previously separated by fields was joined up with Wivenhoe by 1914. The map also Includes brief details of the development of the railway and the shipyards, citing the importance of the ‘upstream’ yard up to the 1940s and ‘50s when Cooks began expanding the downstream yard. The upstream yard was successively occupied by Philip Sainty in the early 19th century, Thomas and John Harvey in the 1830s-70s, and Edwin Wilkins in the 1880s. But the greatest period began when the London shipbuilders, Forrestt & Son took it on as an additional arm for their company in 1888. They made the change from mainly timber-built yachts to larger steel-built ships, and stayed (with several changes of name and amalgamations) until the 1920s. The map of Wivenhoe shipyard published by Forrestt & Co circa 1905 shows considerable changes to the river frontage. There are also details of the ‘Ferry’ and the ford which could be forded by carts at low tide until dredging made it unusable in the early twentieth century.