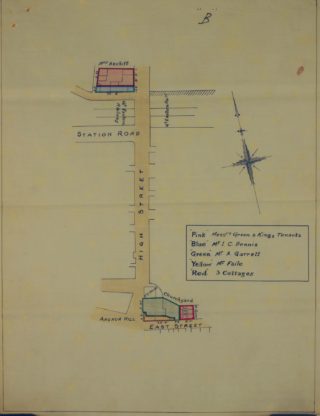 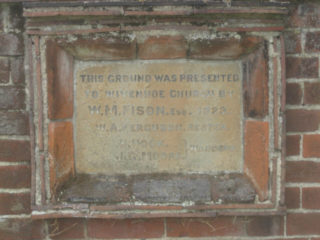 Recently we acquired copies of transactions referring to the title of Mrs Caroline Louisa Constance Havens, the Widow of Edward John Havens (1855-1917) the son of Philip Havens the General Practitioner and Surgeon (1805-1874), to property they owned in the lower end of the High Street and the corner of East Street. The abstract covers the period of 1902-1920 and the first transaction dated 27th January 1902 is particularly interesting as it contains not only a plan of the property but also a Schedule which describes both the nature of the businesses carried out on the premises but also gives the names of the occupiers at the turn of the century.

The ‘Pink’ premises just above the junction of High St and Chapel Road relates to what at the time was the Yachters Arms but today is the Mango & Lime Curry house at 47-49 High Street; the ‘Blue’ premises on the corner of the High Street and Chapel Road was at the time a butchers and delicatessen but now is a private residence (also previously the much loved ‘Talisman’s’ shop beloved of party goers in the 1970s); the ‘Green’ premises belonged to Mr Arthur Garrett the draper see: https://www.wivenhoehistory.org.uk/content/topics/trade-and-industry/shops-in-wivenhoe/arthur-garrett-draper and is now the Village Deli at 4 High Street; the ‘Yellow’ premises was occupied by Mr Faile, the Fishmonger and is now the Village Deli Tea Room. Mr Faile (or Fale as it was alternatively spelt was later to purchase the premises now known as  Tollgate Fisheries at 1 East Street.

The ‘Red’ premises cited as 3 tiny cottages on East St had been demolished by 1924 when Caroline Louisa Constance Havens in a Deed dated the 21 January 1924 conveyed the parcel of land on which the 3 cottages had stood to William Martius Wiles Fison Gentleman of Sudbury.

Five days later on the 26 January 1924 William Fison gifted the land to St Mary’s Church under the authority of the ‘The Conservation of the Churchyard Act 1864’ and the plot became the south entrance to the Churchyard now known as the Carolin Gardens see:  https://www.wivenhoehistory.org.uk/content/new-contributions/gift-of-land-in-east-street-to-st-marys-church-1924 and a faded plaque on the west wall of the Carolin Garden commemorates this gift.